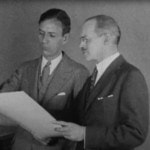 Here’s a really nice one from the Metropolitan Museum of Art, celebrating 150 years last year (2020), WoW. I’m sure they had many gala’s planned for the whole year, hopes, dreams, and fundraising dashed by COVID-19. Nonetheless, I’m super glad they released this beauty back in January. Look at all the craftsmanship and time it took. There are definitely some areas where things haven’t changed all that much, art preparators, museum technician, conservators, woodworkers, metalsmith, all working hand in hand to get it done. Well, they actually didn’t call out art preparators or art handlers in this piece. I wonder when those titles came online? Can someone help me track that down?

The video is silent, so I’ve added the transcript and time stamp so you can skip ahead if you prefer, it’s just over 25 minutes, you may not have that long to spend. In addition I’ll add in my own commentary here and there (think Mystery Science Theater 3000 style). The description below their video reads as follows:

Sumptuously shot in richly contrasting black and white, this lyrical series of vignettes provides a window into the hidden workings of the Museum. Employees punch time clocks; janitors dust the galleries; conservators handle textiles and armor; curators puzzle over fragments of ancient statuary. It begins and ends with footage of workers entering and leaving the Museum, a moving homage to the first film ever made, Workers Leaving the Lumière Factory (1895). (*see below*)

As part of The Met’s 150th anniversary in 2020, each month we will release three to four films from the Museum’s extensive moving-image archive, which comprises over 1,500 films, both made and collected by the Museum, from the 1920s onward. This includes rarely seen artist profiles and documentaries, as well as process films about art-making techniques and behind-the-scenes footage of the Museum. 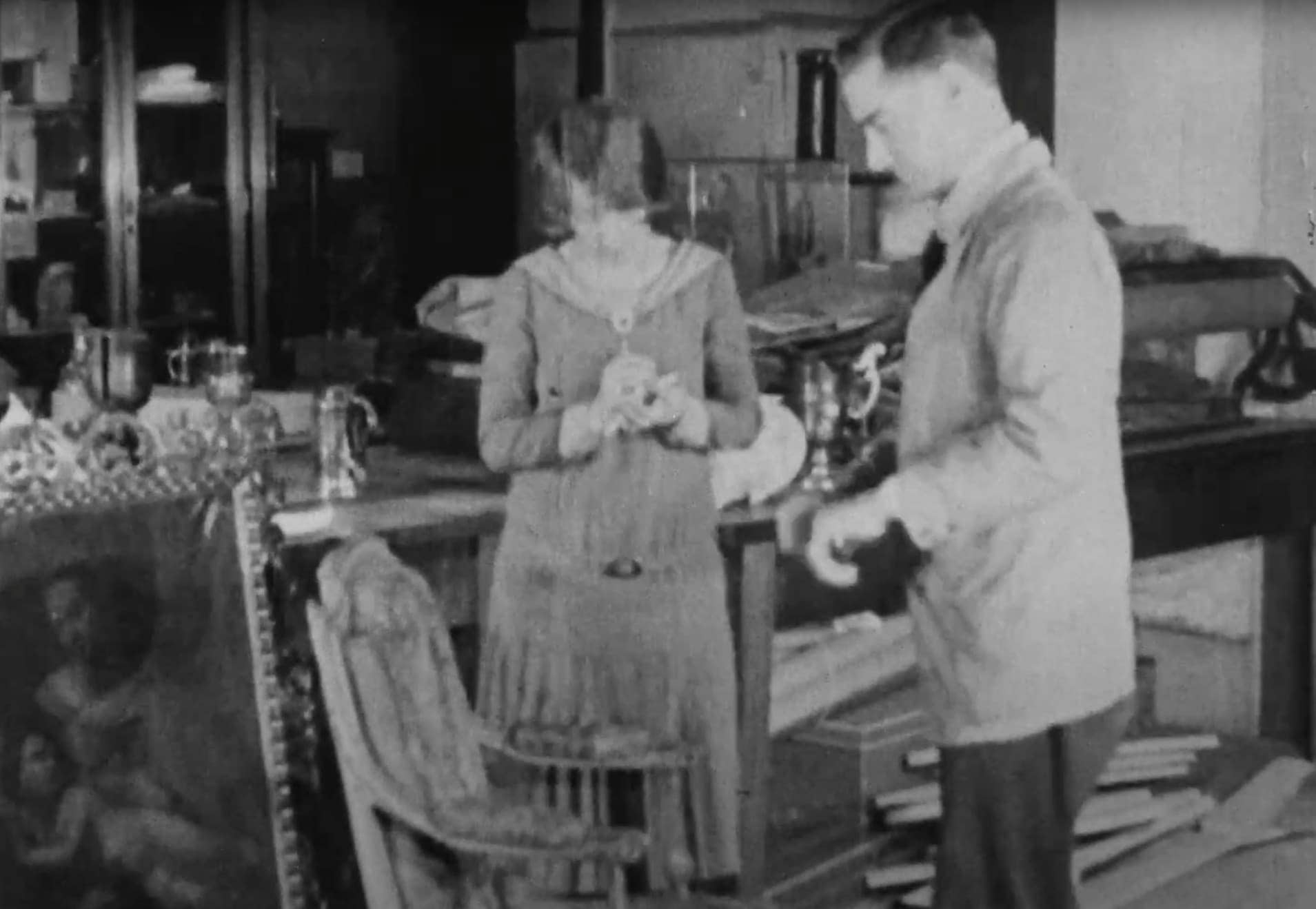 Behind the Scenes: The Working Side of the Museum, 1928 | From the Vaults

0:15  BEHIND THE SCENES: The Working Side of the Museum, Produced by: The Metropolitan Museum of Art

0:28  Few visitors familiar with the galleries of a modern museum realize the amount and scope of work involved before an exhibit is ready for the public. In addition to the expert knowledge required for the selection and classification of objects, the amount of manual labor is considerable(.)

Just to be clear, the curator has “expert knowledge”, but the craft folk who make it all happen, make it look beautiful, make it as perfect as can be, they are the “manual labor”; that’s it. At least it says it’s “considerable” manaul labor.

I wonder how many car types and styles there were in 1928, they all look pretty similar.

1:14  The Fifth Avenue entrance to The Metropolitan Museum of Art(.)

1:29  The Museum maintain its own workshops. Here are to be found carpenters, painters, upholsterers, metalworkers, printers, letterers, gilders, and photographers, all of whom are called upon for cooperation(.)

The next time someone is weeding vinyl I want to call them a “letterer”, but I think that would be a disservice to the work of a true letterer. Do you think the ö over cooperation was a typo or something particular from that time?

Hats and nice dress all.

Do you think the sweeper could work, I dunno, anywhere else? Clearly done for the shot, but awkward.

2:36  Where works of art are received from all over the world(.)

...and some with questionable provenance. Incidentally, this is one of the few scenes, if not the only, with a guy smoking. I expected more.

What’s with the guy and the palette of paint? “Conserving” already? Slat a lil paint, good to go.

3:01  Every object must pass through the Registrar’s Office. Here a careful record is made

3:51  Next comes the Photograph Division, where everything must be photographed before being put on exhibition

Look at that pro drape move, now you see me, now you don’t.

4:42  Here are stored over three hundred thousand negatives, covering the entire range of the Museum collection

5:03  Before an exhibit can be installed, show-cases must be made and pedestals built

Does anyone use the word “showcases”? It’s not a bad term, but I haven’t ever heard it used in the museum context.

5:29   The Paint Shop, where finishing touches are added

Do you think that’s black lacquer he’s apply by hand? And how about that whicker chair that guy made. I mean I could make a solid museum bench, but I’d be hard pressed to whip out a chair like that!

What’s with the close up of the brush dry work? Is this just posed by the director, or maybe one of you can guess what’s being applied?

5:56  The Metal-Case Shop. A show-case under construction

6:16  Metal rods for the framework

Is that solid steel bar he’s cutting? That’ll be heavy, whatever he’s making.

Ok, so aside from the sweet hand work on this guy, look at the custom tray he built from scraps of what-not. IS there a fun term of looking around the shop and whipping up a quick tool, tray, support device, etc???  There should be. Put your ideas in the comment below…

7:40  The Molder’s Shop, where plaster work of all kinds is done

8:27  The storage vault and workshop where cinema films are assembled

Why is she wearing gloves and he isn’t?

What’s this shot with the security guard? B roll that accidentally made it in? I mean I like seeing the guy and his uniform, he does a descent job of not looking right at the camera, but….

9:29  In the Armor Workshop. A suit of armor is mounted on a manikin, constructed in the Carpenter Shop(.)

I like how the mannequin’s hands have joints in them, nice touch. The guy is demonstrating proficiency bordering on carelessness. I don’t think I knew suits of armor were so light. I guess it makes sense.

11:03  In the Egyptian Department is a room devoted to the treatment limestone objects(.)

11:23  Because of the difference in climate between New York and Egypt, the salts must be removed to prevent disintegration(.)

11:55  After the surface has been protected, the block is immersed in water and left to soak(.)

Does anyone know what he might have been brushing on to “protect the surface”. How about the lean into the bath? Tough on the back going in and out!

For a moment it looked as though he was about to take a little taste to see if there are any salts in the water.

12:28  The Water is tested at intervals of two weeks until no salts remain(.)

Doesn’t this feel like lonely basement work? Like no one sees this guy all day and he has a particular smell at the end of the day.

13:07  The effect of climate on a block of stone which has not been treated(.)

13:22  Objects are brought to the office of the Classical Department for inspection(.)

My favorite part in the scene is how he almost left the room in the wrong direction, she doesn’t flinch though. Was film too expensive to reshoot that wee lil scene? Maybe it was shot on the very last day, folks were tired and under caffeinated…

“Hmm, does this piece fit, how about this one, no just put that back on the pile. No organization for me thank you” This HAS to be a director choice right? No way his job it to put a pot (or whatever that is) back together  and he doesn’t have all the pieces laid out in front of him.

“Yep, I’m here to drop off this priceless marble head, I’ll leave it here on the corner of the table for you and leave before you get here, have a swell day Joe”

14:18  The correct angle must be decided upon before this marble head is mounted(.)

Look at how modern the middle light is, bare lamp on a wire, so chic.

15:14  The labels and posters that one finds in the galleries are all printed in the Museum workshops

Where hand-lettering is done(.)

Man, can you imagine cranking out the labels, by hand!

16:31  A smaller press – Museum leaflets are being printed

Do you think any hand accidents happened on this machine?

I see folks in development still doing this kind of thing. Not much changed here.

Well, ok , I don’t see much sewing of collateral anymore.

The best I can make out what gets printed is this:

“American Industrial Art, Tenth Annual Exhibition of Current Manufacturers (maybe?) Designed and Made in the United States.” And down below it says “Gallery of Special Exhibitions” and there’s more below that, but it’s not discernible, maybe someone from the Met will read this and can clarify all the details of this poster?

17:53  The collections in the Museum are divided into Departments, each headed by a Curator. Among other duties, he is responsible for the arrangement of the galleries under his charge(.)

The gallery to be arranged is the one in the Department of Decorative Arts. The Curator determines the general plan of arrangement(.)

“HE” is responsible “HIS” charge.  Not many female curators back in 1928 I suppose.

So what is junior holding up here? A photograph of the piece, a drawing with dims, materials and such? And check out the card catalogue for all of these cards. One for every object I’d suppose. Yikes!

18:45  The head painter submits samples of color for the walls(.)

He’s fairly well dressed for being the head painter. Not painting much these days I suppose.

Notice “head painter” did not get the same capitalization treatment as the “curator” received earlier?

19:03  After preliminary flat painting the walls are “mopped” to secure effects of texture and broken color(.)

The phrasing for this section is a bit odd, but I think it means they are sponge painting the walls, top to bottom. That’s a ton of work and hard to get right. Again, real craftfolk here.

19:25  When the painters have finished, the objects to be shown are brought up from the store rooms(.)

The flatbed doesn’t look too clean.

19:46  The curator and his assistant direct the placing(.)

I like how junior just has his hands in his pockets, along fro the ride, watching dad do the work.

20:14  The upholsterers hang the draperies of a Louis XVI bed(.)

Back then you really needed someone dedicated to holding the ladder. Have you ever had the pleasure of going up an old wood ladder? It’s truly different if you’re used to aluminum or fiberglass.

I like how junior uses his pen to “conduct” the height of the painting, “an inch higher, now that side, a little lower, now both go up, let’s see…”.

What does he whack in between the two pieces of glass at the end there? A wedge perhaps?

23:18  Before the gallery is open to the public, representatives of the press are given a private view(.)

We all know the drill on press preview right? Get done, but if not, get out, stop work while the press preview the show. Then get back to work and get it done, perfectly, before the opening. Aha yes.

I guess it means it’s time go back to work, no time to enjoy the triumph, no opening party for the men and women who put it all together. This is still true for some of us.

I hope you enjoyed the video and commentary.

For reference, as mentioned earlier, here’s the original video this Met piece paid homage to: 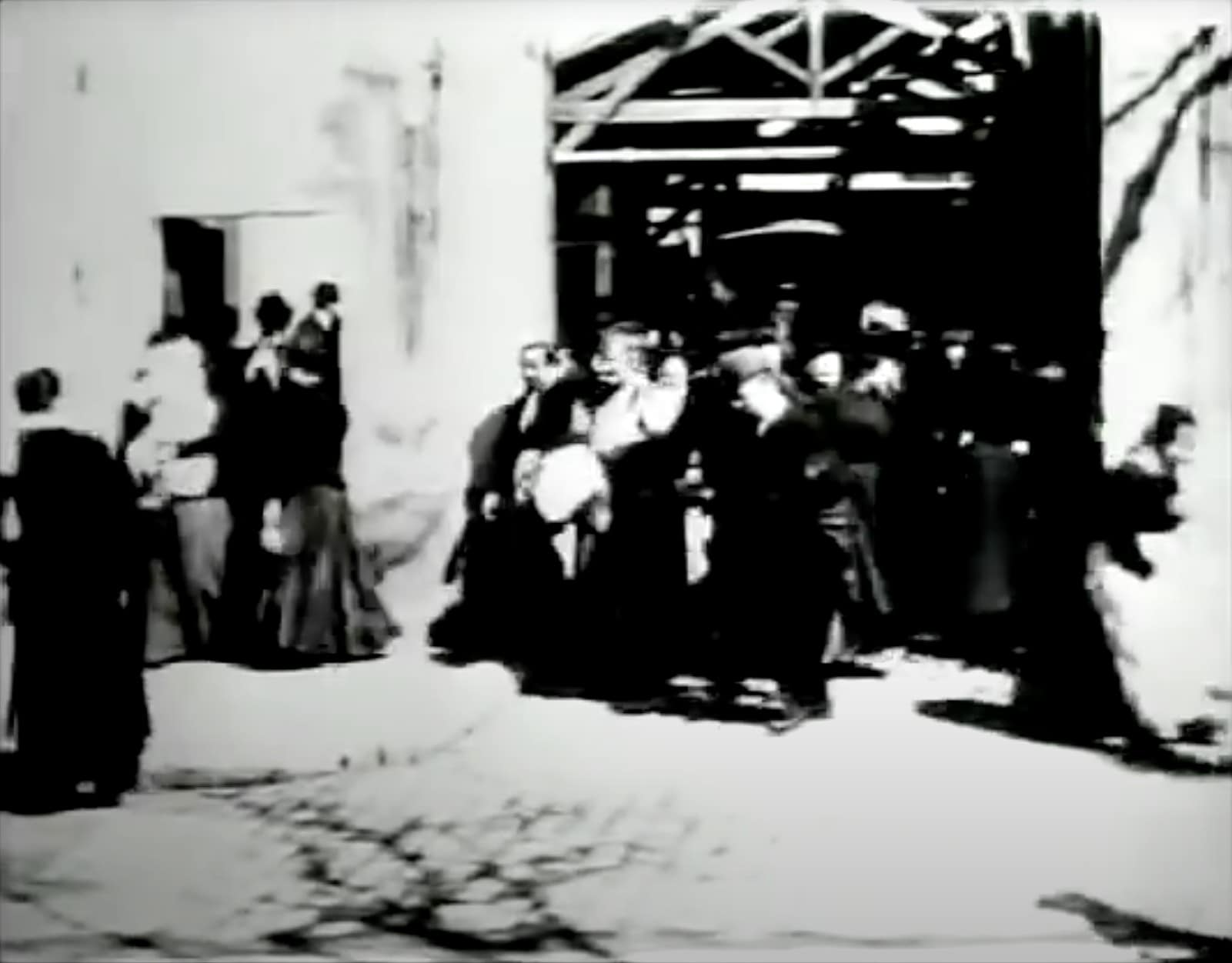 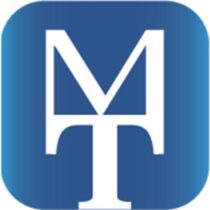 Follow Us
Latest posts by Museum Trade (see all)

How Do You Create a Faux Brick Floor for a Fireplace?
September 6, 2020 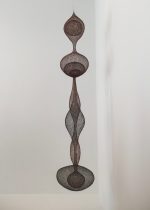