Home » The Beautiful Art of Lighting, The Renwick Gallery Transforms its Spaces 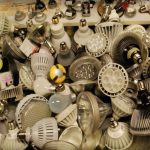 When architect James Renwick, Jr. designed the capital’s first purpose-built art museum near the White House in 1859, the lighting was strictly gas. That and the large windows that allowed sunlight to stream onto the collected works of the wealthy philanthropist and financier W. W. Corcoran that were originally housed in the Second Empire style building.

When the Renwick Gallery of the Smithsonian American Art Museum reopens on November 13 after a two-year, $30 million renovation, the art museum once known as the “American Louvre,” will host in its first exhibition “Wonder,” the eye-popping installations of nine contemporary artists from Jennifer Angus to Patrick Dougherty to Maya Lin.

The building’s 19th-century windows were part of the restoration, though often covered with screens to protect art from direct sun.

And rather than the hiss of gas or the electric incandescent bulbs that came later, the building will be reliant on brighter, more precise LED light that the museum’s designers helped develop in conjunction with manufacturers such as Solais. The museum will have a brilliance that will revolutionize not just the storied Renwick, but likely other museums in the future.

As innovative as any of the works of art on view here will be the lighting configuration, designed to reduce building electricity use by a whopping 75 percent. It will save 25 percent in air conditioning costs, since the far more cooler LED lights won’t raise interior temperatures. Further, the LED lights—the acronym stands for light-emitting diode—will last four times longer than incandescent or halogen lights for further savings.

What museum visitors will notice, however, is how stunning everything looks.

“I always thought when we went to more energy-efficiency, it was going to suck, that I would have to reduce the quality of light,” says Scott Rosenfeld the museum’s lighting director. “What we found was that not only does it not reduce quality, but it provides a whole new level of choice that we didn’t even know existed.”

Rosenfeld, who says he began his career as “a lightbulb changer at the Walters,” the museum in his Baltimore hometown, has since become one of the nation’s leading experts on museum lighting. As chair of the Illuminating Engineering Society’s museum committee, he’s worked with the Department of Energy and researchers from Northwest Pacific Labs, among others, to determine exactly the right new lighting for the nation’s oldest purpose-built art museum.

Luckily, he got to meet with Shuji Nakamura, who won the Nobel Prize for Physics last year for helping develop the blue LED, an invention which revolutionized the creation of white light with the previously existing semiconductors that created red and green LEDS. Blue LEDS had been more difficult to make because of their shorter wavelength.

“Scott is one of the museum lighting designers who is really on top of the products and has been very progressive in trying LEDs and figuring out where they work,” says Naomi Miller, senior lighting engineer at the Pacific Northwest National Laboratory in Portland, Oregon. “Now he has a chance in this renovation at the Renwick to apply what he’s learned and use a new crop of LED products.”

In his red hard hat, with the clamor of construction going on all around him, Rosenfeld was happy to show the properties of the new light through charts, graphs and a spectrometer on his laptop.

He talked about the five controllable properties of light: intensity, distribution, movement, direction and spectrum. He even pulled out what looked to be a child’s spinning top to demonstrate whether a light had the dreaded flicker—the effect in old fluorescent lights that is believed to give people headaches and even migraines.

But then he looked up and said, that with the LED lighting, “we have figured all this out. We have drilled as deep down in this as we possibly can. So when people come to the Smithsonian,” he says, “They want to experience art. They don’t have to worry about spectrum.”

To do so, he worked with fixtures manufacturers that would better cool the sensitive microchips of the lights, and ordered the manufacture of bulbs that would screw in as easily as the old lighbulbs. And because the ceilings in the old building were 26 feet high, he’d need extra bright lights that could make pinpoints on often tiny objects below.

“I started going to the Department of Energy conferences, talking to the manufacturers, to make the case for what we needed,” Rosenfeld says, who now has an array of LED technology to work with.

“See this lightbulb here?” he says, cupping one in his palm. “It didn’t exist when we started this project.” 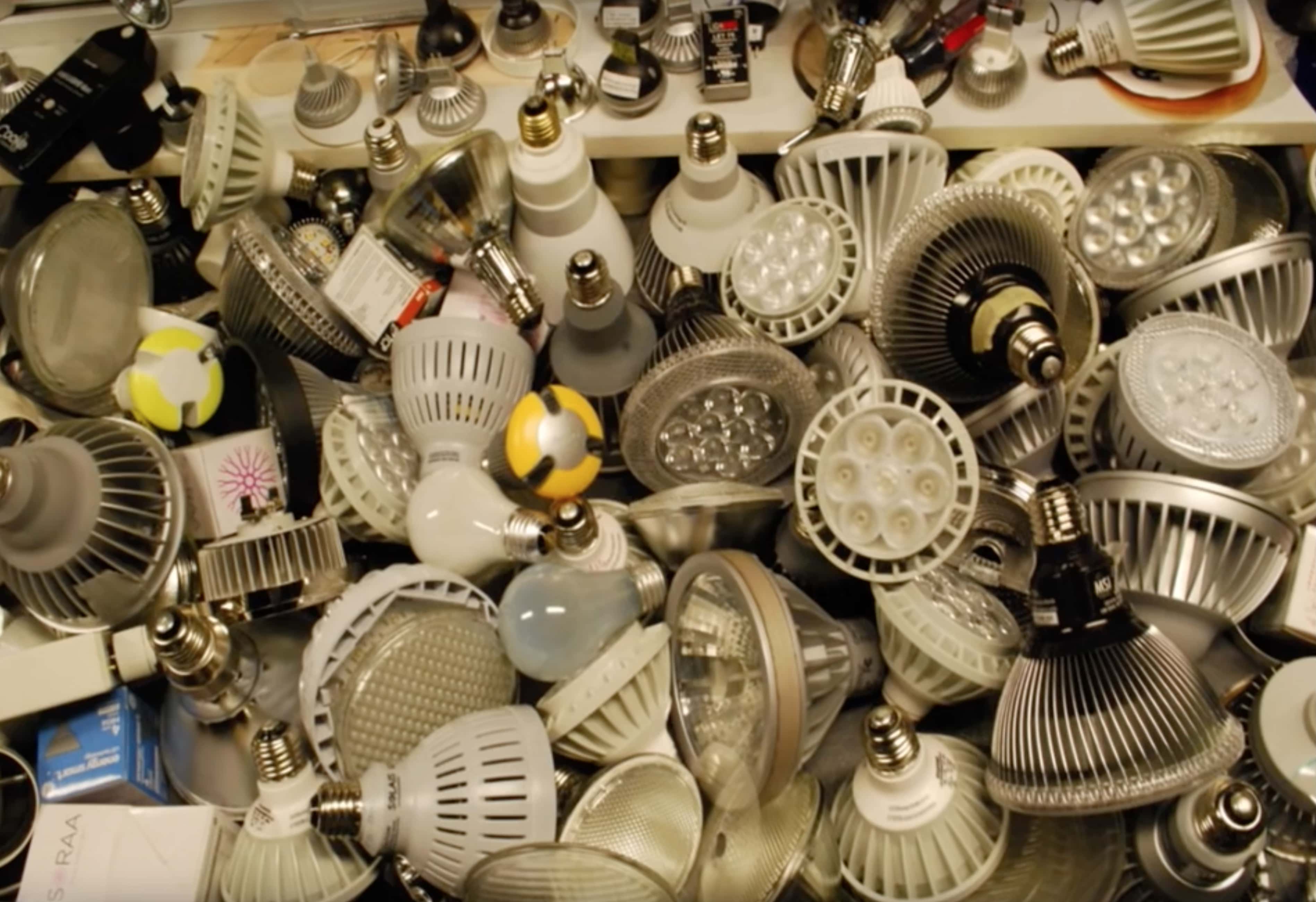 Lighting has a long history in museums and in the past 10 years it feels like its been on hyperdrive. When I started at the Crocker Art Musuem in 2008 I was already looking to find lams that would bring out the best in our art. There were a few promising candidates, but none of them were "it." I let
ARVE

A 4-degree LED spotlight will put the light precisely where it’s needed, so compact and intense, it will make colorful glassworks look as if they’re glowing from within—and it will only take a 10-watt bulb.

It’s bright enough to illuminate something two stories down, but remains cool enough that he can put a film to filter it, broaden the beam or otherwise shape the light to the object.

“I’m going to match the size of the light to the size of the thing,” he says, referring to the art. “Otherwise I get ugly shadows, there’s light everywhere. I want the artwork to be the brightest thing. And these pinspots allow me to do it.”

Rosenfeld has lit the Smithsonian American Art Museum and worked with his colleague Richard Skinner, the veteran lighting designer at the Freer and Sackler Galleries, but he says he enjoys the Renwick and its myriad textures and media.

What works in the museum will likely have implications elsewhere—not only in other galleries but in home and commercial work as well.

“The Department of Energy had a vested interest in making sure the rollout of LEDS go as smoothly as possible,” Rosenfeld says, because “the rollout of compact fluorescents went terribly!”

Those energy-saving bulbs had good technology, he says, “but there were so many bad examples of this good technology, that people didn’t like it: Lamps that failed, or had bad color, or came in odd sizes. They were ugly in one way or another.”

“My concern is that consumers are seeing all LEDs as the same,” he adds “because it is so difficult to tell which ones are well made.”

The museum will save further energy by reducing lighting in the hours after the museum closes. When lights go on at 7 a.m. for maintenance and cleaning, they’ll do so only when people are in the room, detected by occupancy sensors, reducing the time lights are on by about 25 percent.

Turning LED lights on and off doesn’t cause the failure that occurred with incandescent lights, Rosenfeld says. In fact, it will make the LED lights last longer.

Because they are also digital in nature, they’ll soon be able to be operated and adjusted through computer commands, once such technology is available.

Plus they’ll last much longer. “Our lightbulbs used to go out about every six months to a year,” he says, “now we can expect at least three years from them—and we hope to get five to ten.” 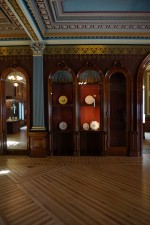 Issues and Solutions for Peripheral Strip Lighting Inside a Case.
August 6, 2015

Your ordinary is someone else’s epiphany.