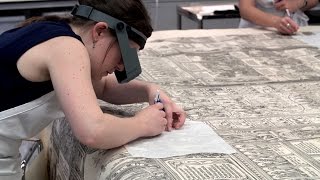 Hi Gang, Here's a fascinating project from the British Museum, they conserved Dürer's Triumphal Arch. What time and care it took to clean this up. It goes to show that housing something right the first time can pay dividends in the future. Seeing as how most of us don't have the time, money, and fac
ARVE

Here’s a fascinating project from the British Museum, they conserved Dürer’s Triumphal Arch. What time and care it took to clean this up. It goes to show that housing something right the first time can pay dividends in the future. Seeing as how most of us don’t have the time, money, and facilities to take on something like this, it’s nice to get a glimpse of the process and maybe take home a tip or two. Enjoy

I know many of you (like myself) rely on the written word for many reasons, your speakers are broken, you’re in a cube-farm, or you simply would rather read the information. I’ll try my best to follow all the videos with the transcription. If I mission please shoot me a quick heads up.

This is Dürer’s Triumphal Arch which has been in the British Museum since 1837. It is the largest print that we have measuring some four square meters and the challenge has always been the storage and preservation of it. Clearly this is a print designed in paper. It was designed for decoration and it would have been coloured and posted up in baronial halls and courts of the Holy Roman Empire.

When it arrived in the department it was in five long strips. Thereafter it was kept in portfolios until the 1890s when it was assembled into one sheet as was the original intention. Since then it has been on permanent display which is an extremely long time for anything of this fragility. And it is just recently that we have the opportunity to remove it from the frame and we have now got the opportunity with a generous donation of funds to preserve it and to think about its long-term storage.

The first stages of conservation were really mapping the damage. So we used clear plastic sheets to draw on and we started to get an idea of what we’d have to deal with. The problem we faced was actually accessing the middle of the print and this was a problem that we also saw them dealing with in Copenhagen when they were working on their version of the print. And we took their idea and ran with it which was to have the large roller sitting on the top of the table and the print moving along the table and down onto a secondary roller underneath the table. Using this two roller system we firstly cleaned the paper which we call dry cleaning which means using erasers to take the surface dirt off. If you don’t do that any subsequent treatment using moisture or water would fix that dirt into the paper.

The print had been exposed under glass since 1970s but before that time it had been displayed unglazed with the coal fires that you find in the early 20th century. So we’re expecting and we found quite a bit of surface dirt. The print moved along the table and round and down onto the roller. At that stage we were able to take more photographs and map more details of the condition of the paper. So today I’m trying to find out what adhesives were used on the Triumphal Arch print because the conservators want to take off the backing so they want to know what adhesives are there. FTIR Fourier Transform Infrared Spectrometer. By analysing the difference between the infrared light that we shine through the sample and the infrared light that gets to the detector we can then see what the characteristic material is. The adhesive underneath was starch.

We turned the print over and started to remove the lining. We did some tests on what to use for this using various types of humidity and the best one we found was holding the humidity in a gel which was cellulose based and that we could just put in small areas on the back and wait till the moisture just worked its magic on the starch adhesive and then we could peel the textile off. And we realised that the print itself was quite weak once you took the lining off so we had to then separate the sheets at the same time because we didn’t want to go through the second roller scenario because that would be too damaging to the weak paper.

At that point we discovered that the print had been chamfered along the edge as we tried to separate them somebody had very carefully shaved the edge of the paper off. This made life quite difficult because the paper lost more than half its thickness. We are at the stage where we have 36 individual sheets of paper and two small columns at each side of the bottom that are separate. The adhesive that was left on the back of the prints was very discoloured and the print surface itself was quite absorbent and some of the prints were noticeably discoloured so with that scenario with prints there’s a process of removing discolouration by washing. The big advantage of doing this is that you remove soluble acidity which over time is harmful to paper.

So using our special cellulose poultice again we applied this to the back of all the prints using it to swell the starch adhesive and remove it with very smooth bone folders just to scrape it very lightly because we didn’t want to affect the paper itself. At the stage where we had removed as much adhesive as possible we then put the print in a bath of warm water well supported and with two people handling them. The warm water was at the temperature that would dissolve the starch and after a couple of changes of water we could see that the yellow discolouration coming out of the paper into the water was decreasing and at that point we took the print out and we left it to dry. We did that with all the prints and they’re all more or less quite a harmonious colour although some of them are slightly discoloured and they’re much more… they appear to be much more like the colour they would have been originally. There’s a bit more strength in the paper as well.

We are now at the stage of repairing any tears and considering how we will support areas like this that are very thin or where there are small holes and we’ve decided to use repair called pulp which is how paper is originally made from paper pulp and it’s just taking that in a very more controlled way by using a solution of paper; a tone to the right colour in water and a suction table, and to mask out an area that we want to fill like this skinned area. And effectively we’re making a small strip of paper ourselves which we will then lay on the print and it makes a very harmonious repair which remains quite flexible and is ideal for small holes as well.

After the repair of the skinned and the missing areas on the print we are going to line all the sheets with a very thin Japanese tissue which will support them. And it’s the first stage to potentially joining the print back together again. How we go about this and how it ends up is still open for discussion but it will be joined visually in some way if not physically. So the prints will remain in the conservation studio and be perfectly safe here and in good condition until such time as we make a decision.

The National Museum of Denmark Gives Insight into their Conservation Process with Nice Before and After Shots
November 4, 2016