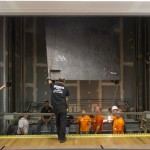 This story was covered by MOMA’s website, but I think Museum Trade is a great place to land all the stories from around the net, we’d like to be a one stop shop, so please let us know if you come across an applicable story so we can link it here. Originally posted August 27, 2012 by Cara Manes who’s the Collection Specialist in the Department of Painting and Sculpture at MOMA, this short article gives a wonderful insight into the tough work we do. If you don’t know Serra’s work, it’s generally a large steel sculpture, that really heavy! Look at the number of guys on this crew, the equipment, the work itself. Amazing. I wish there were more pictures between the piece laying down and being semi-vertical on the giant A-frame, yikes. Personally I’m not experienced enough to lead a project like this, but oh man is it beautiful to watch. Does anyone know if this is still up in the gallery? Please click on Cara’s name to link to her other spot on articles and enjoy the unedited article below:

Richard Serra’s Delineator (1974-75), in the Museum’s fourth-floor collection galleries, is the newest addition to MoMA’s collection of Painting and Sculpture. The work consists of two rectangular steel plates, each measuring 10’ x 26’ and weighing in at two and a half tons apiece.

One plate lies flat on the floor and the other lies flat against the ceiling, together creating a cruciform that spans the full height of the room and delineates its volume. Serra has cited a longstanding interest in making objects that “reveal the structure and content and character of a space.” Viewers are invited to enter the work and walk, at once, on top of and beneath it; with each step, the relationship between the body, the sculpture and the surrounding environment shifts. In this state of heightened perceptual awareness “you’re forced to acknowledge the space above, below, right, left, north, east, south, west, up, down,” Serra has observed. “All your psychophysical coordinates, your sense of orientation, are called into question immediately.”

Serra acknowledges a key inspiration for the work in that of the Russian abstract painter Kazimir Malevich, whose aesthetic theory, known as Suprematism, tested the limits of the possibility of abstraction. In 1915, Malevich claimed “the supremacy of painting,” rejecting the medium’s traditional loyalty to natural appearances and praising its potential for creating a new world through a language of geometric forms floating against a white background. At the core of his new abstract vocabulary was a set of recurring simple shapes, including the square, the circle, and the cross. Serra notes that he conceived of the sculpture while recovering from a back injury that left him bedridden for an extended period, where he spent a lot of time staring up at the ceiling. He began thinking about his own prone body in relation to the beams in his ceiling, and how this situation could render in three dimensions Malevich’s ambition to create purely abstract forms in abstract space.

Delineator’s journey to its new home on the Museum’s fourth floor was an incredible one. An enormous amount of logistical planning by a large team of people was required to ensure that the work could be safely shepherded from the back of a giant flatbed truck, up four stories, and into its new residence. Earlier this year, a group of our curators, exhibition designers, operations staff, registrars, and others met with the artist and members of his longtime trusted rigging company to identify a location where the work could be installed and to design a plan of execution. A wide variety of factors had to be considered—from the walls that had to be built to create the properly proportioned gallery space to the sprinkler heads that had to be relocated in the ceiling to accommodate the hardware installed there to hold the upper panel. One issue revealed itself immediately: too large to fit inside the regular freight elevator car, the steel plates had to be carefully hoisted up together through the empty elevator shaft using a pulley system. 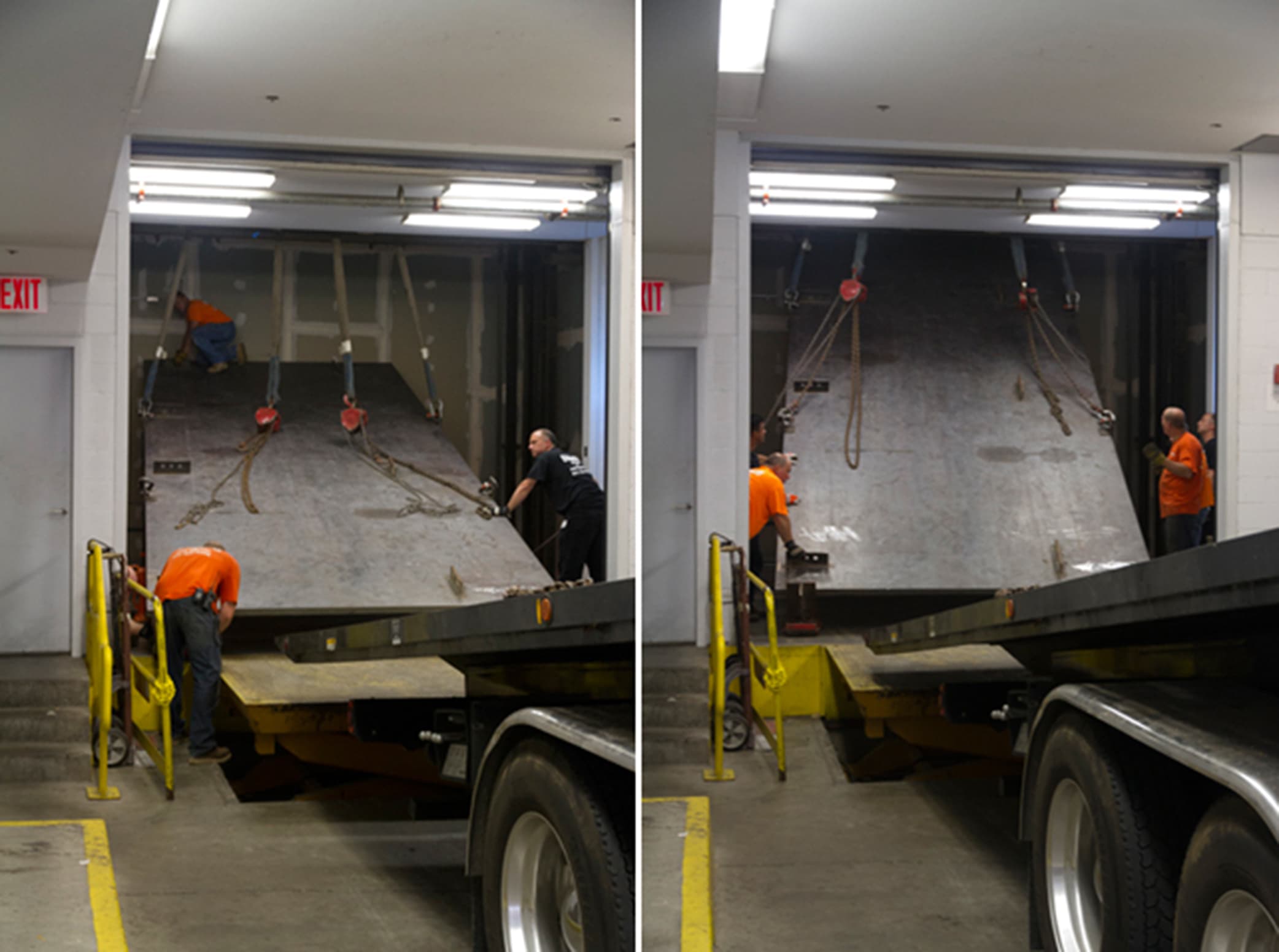 Delineator Coming Off the Truck and into Elevator Shaft 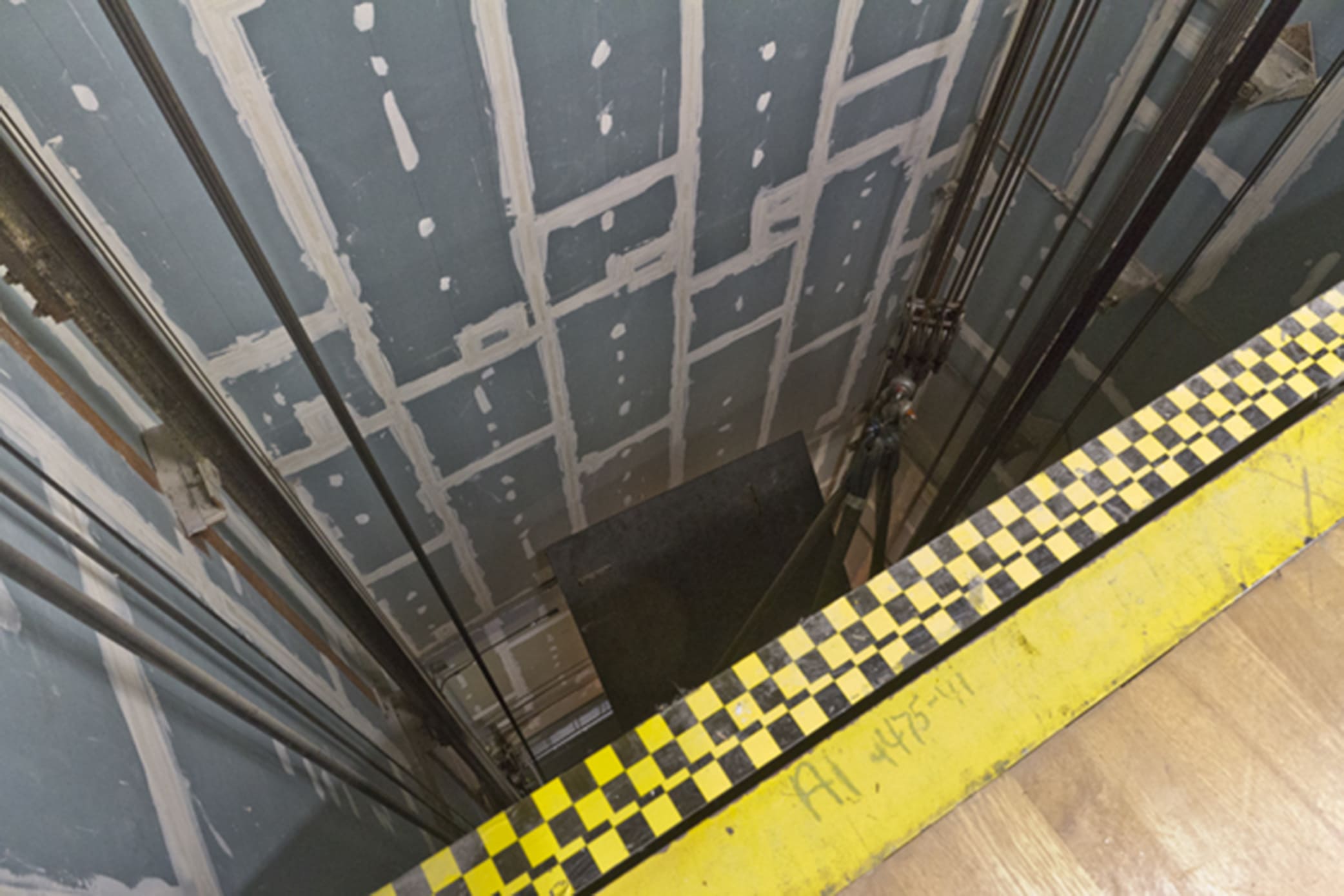 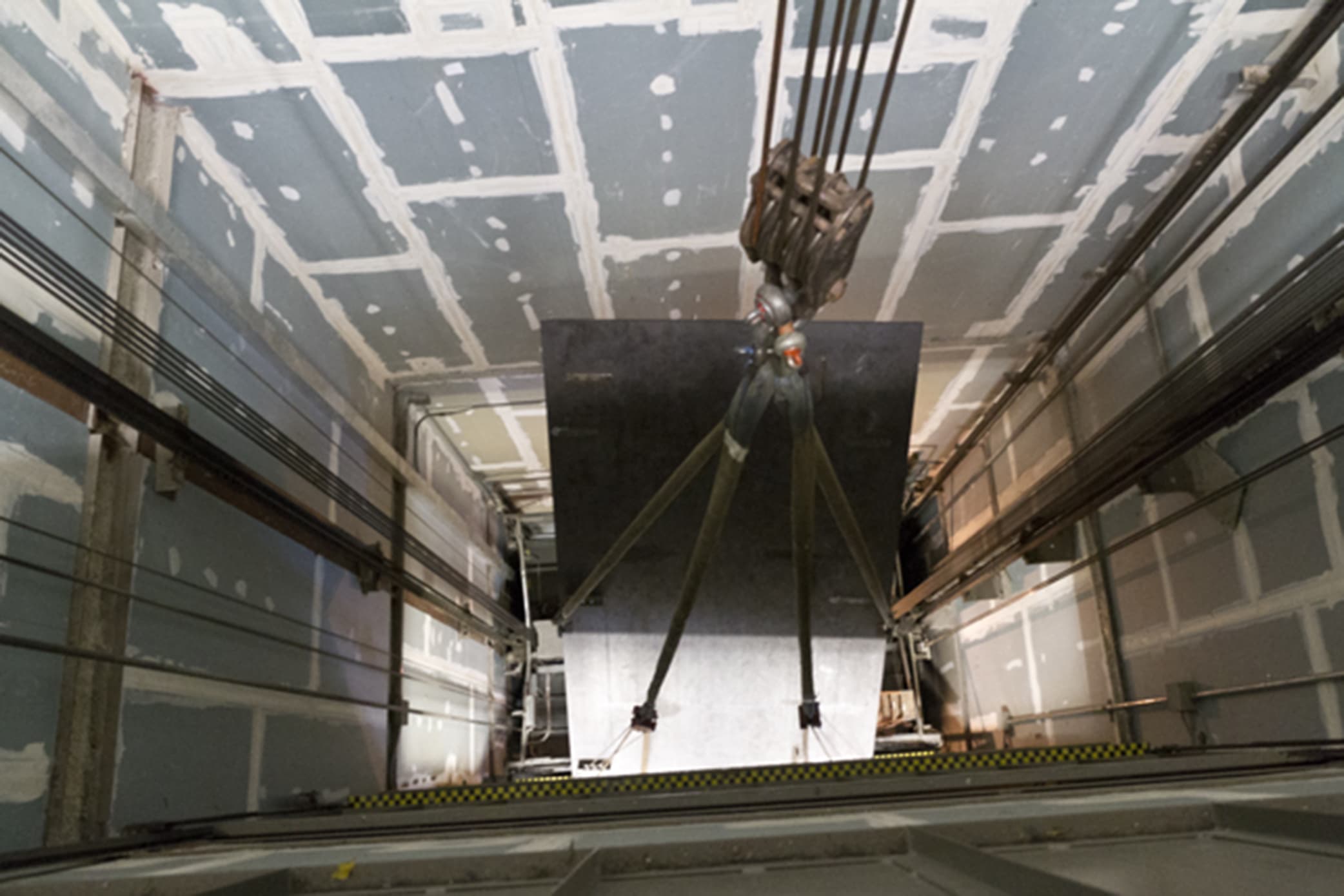 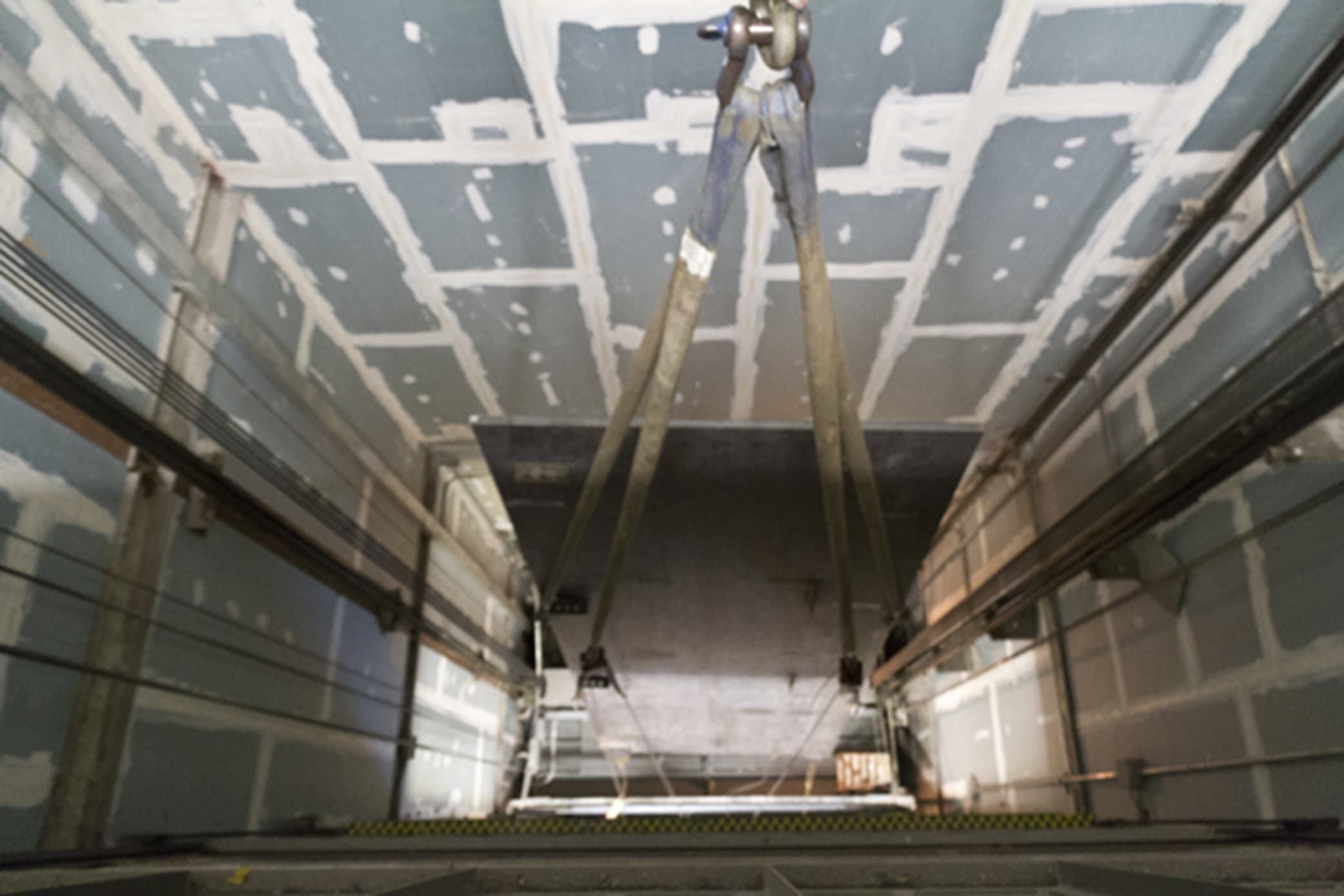 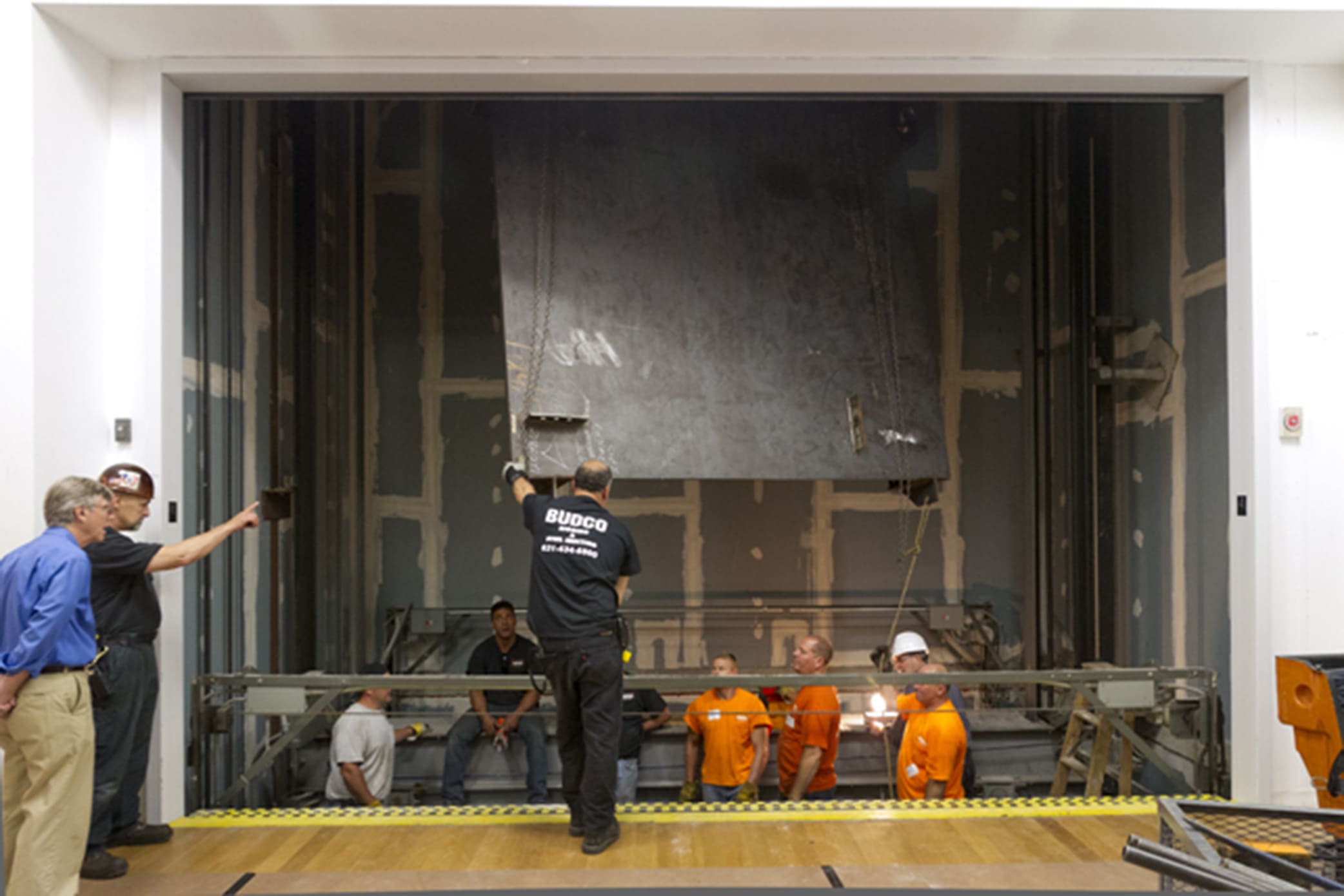 A lot of Trust in the Rigging and Cables 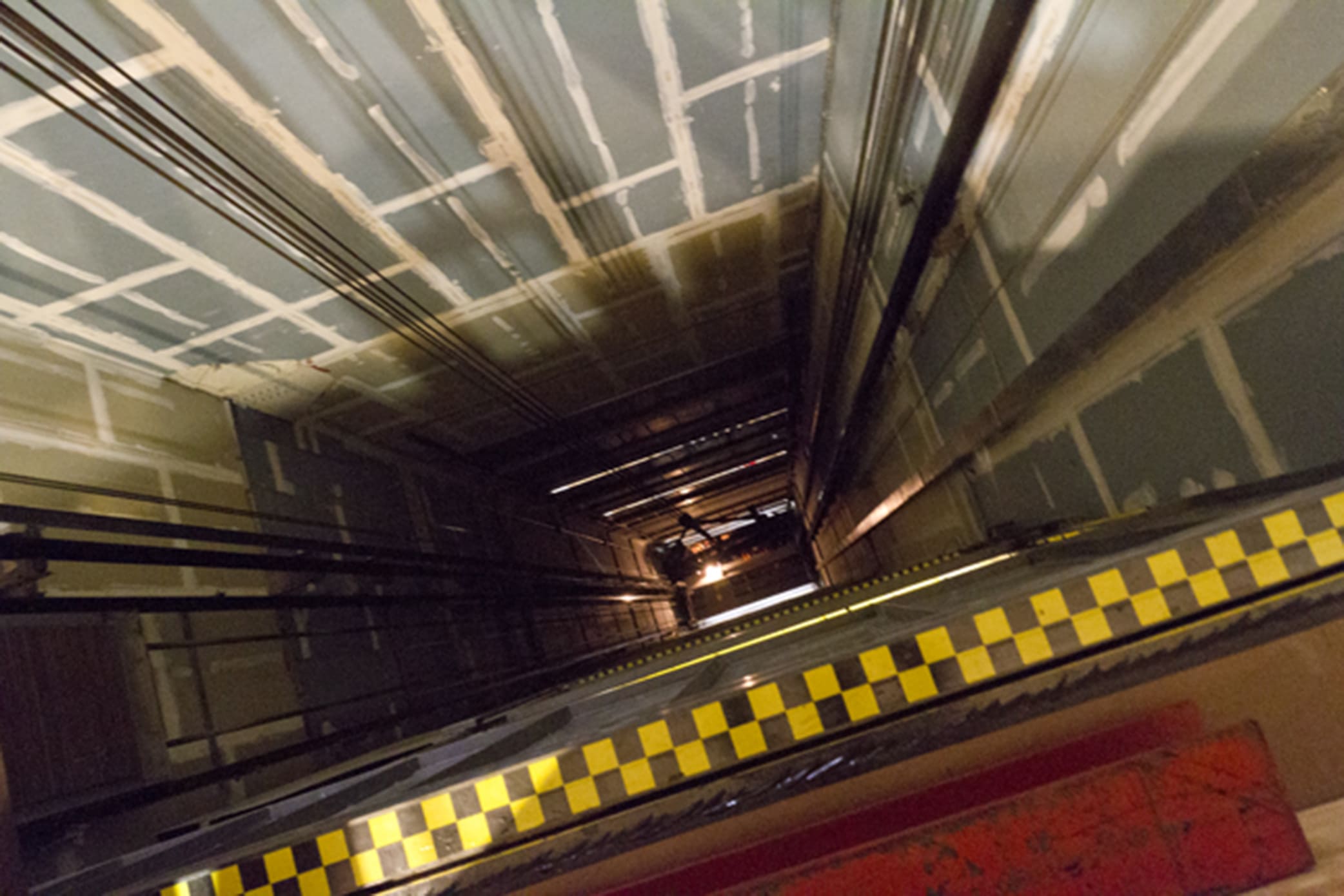 Once the plates were raised to the building’s fourth floor, they were offloaded onto rolling wheels, and separated from one another using a gantry. 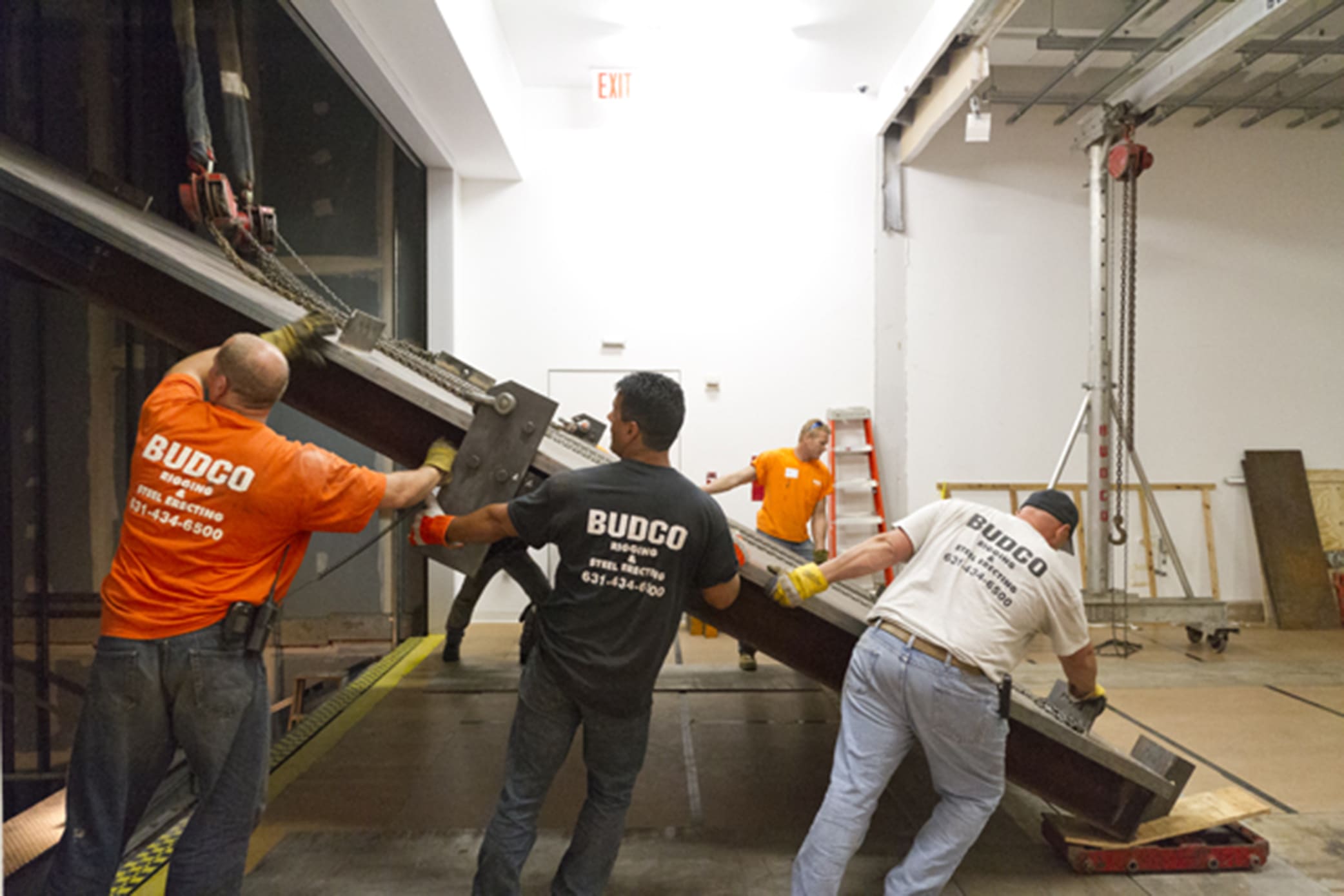 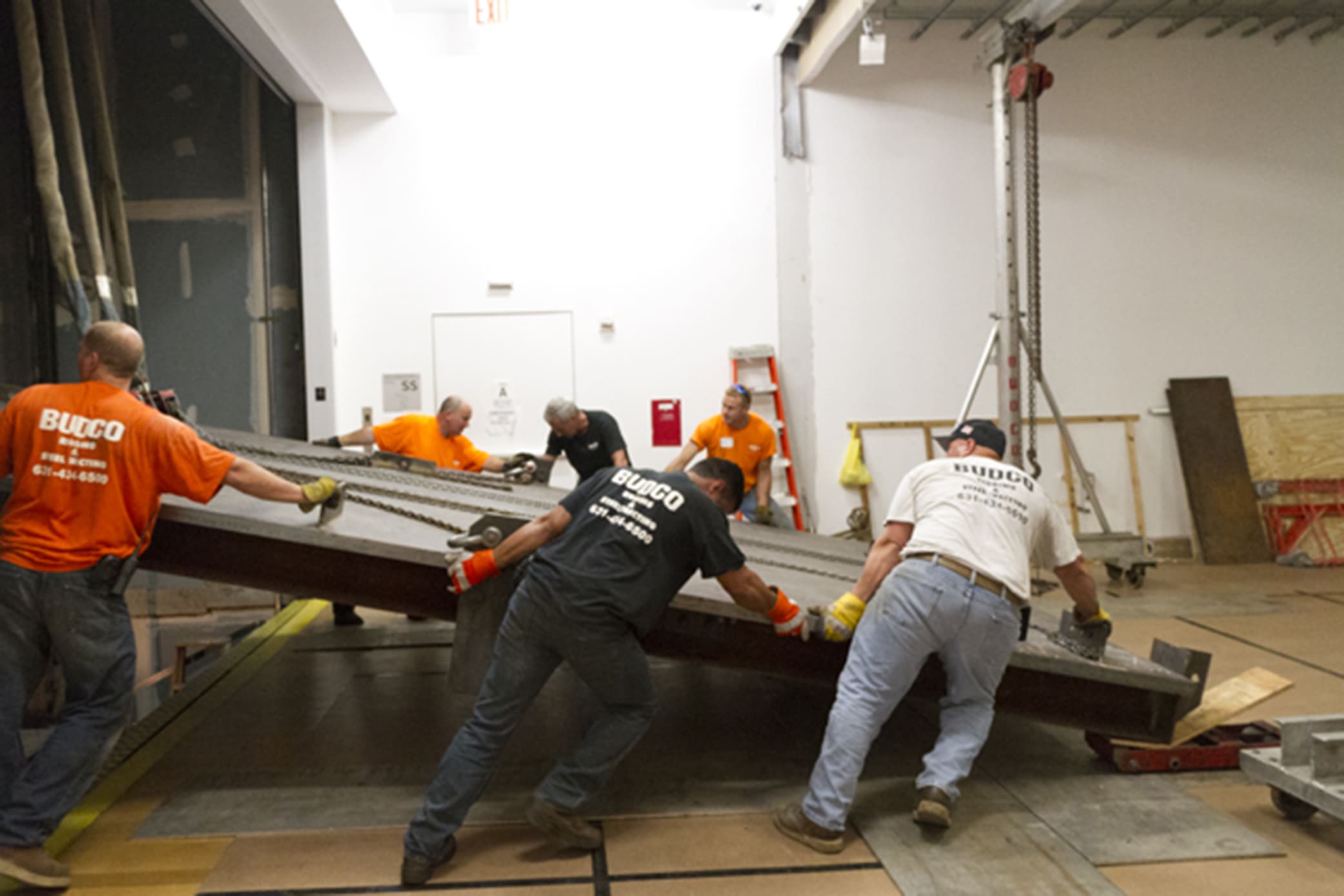 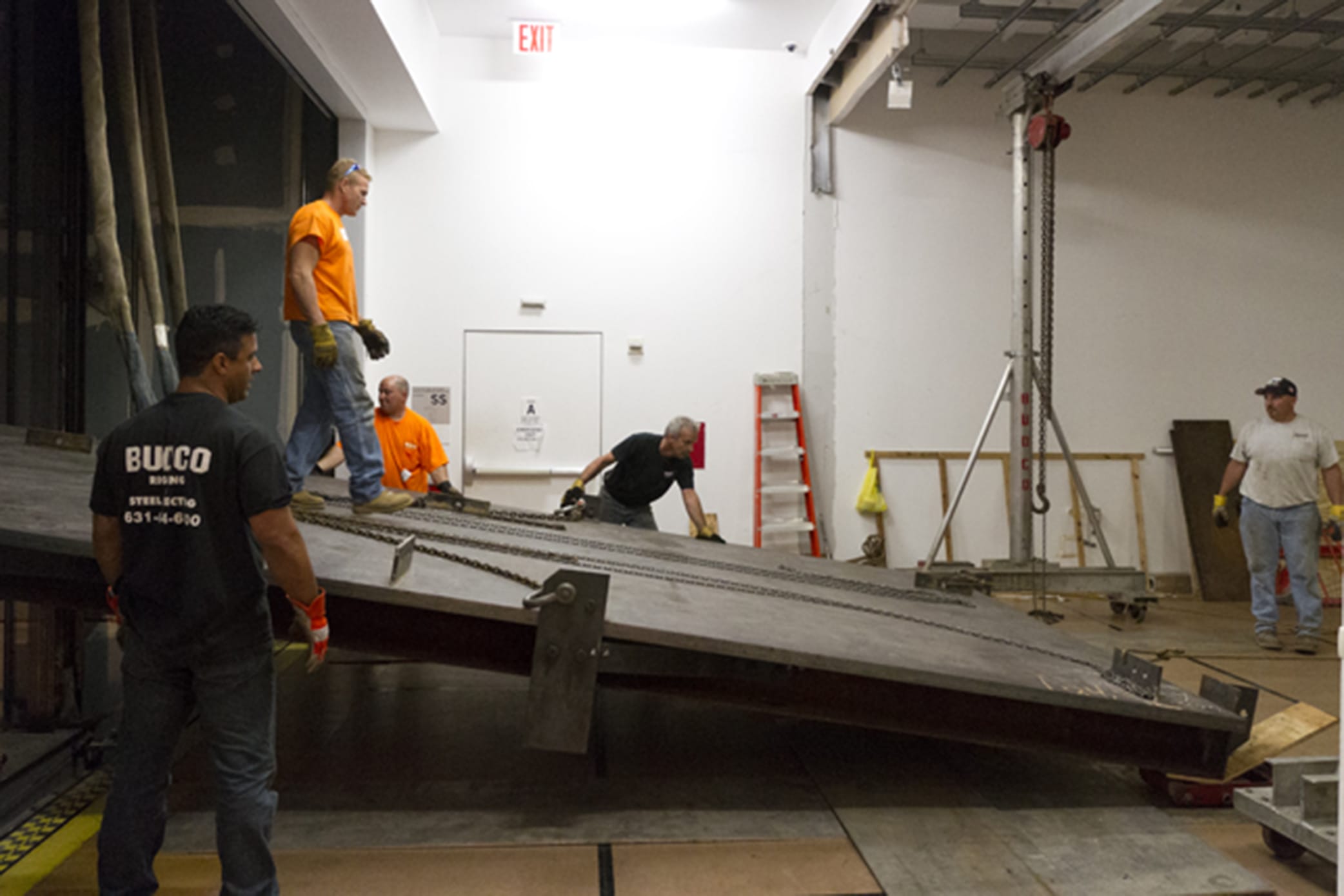 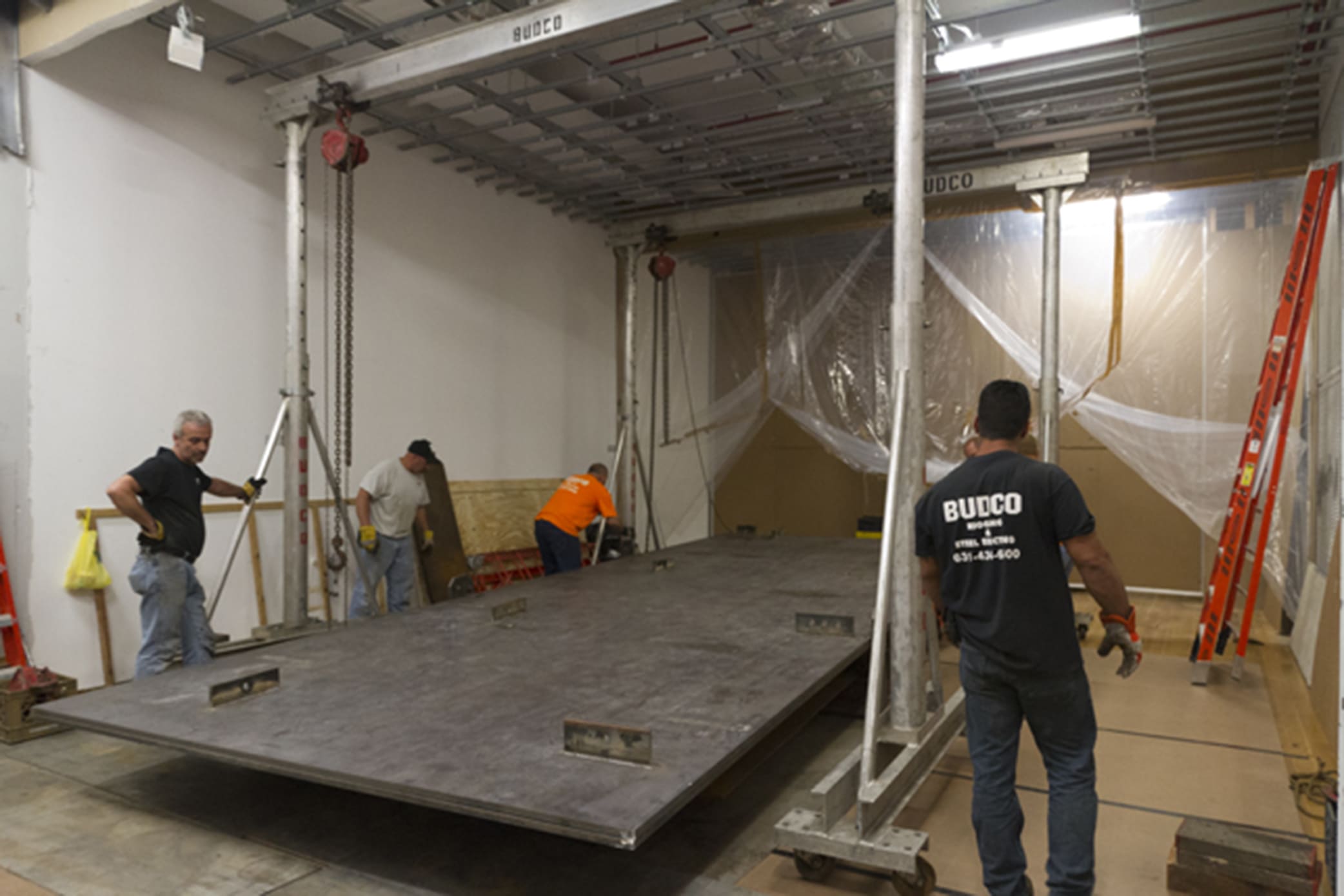 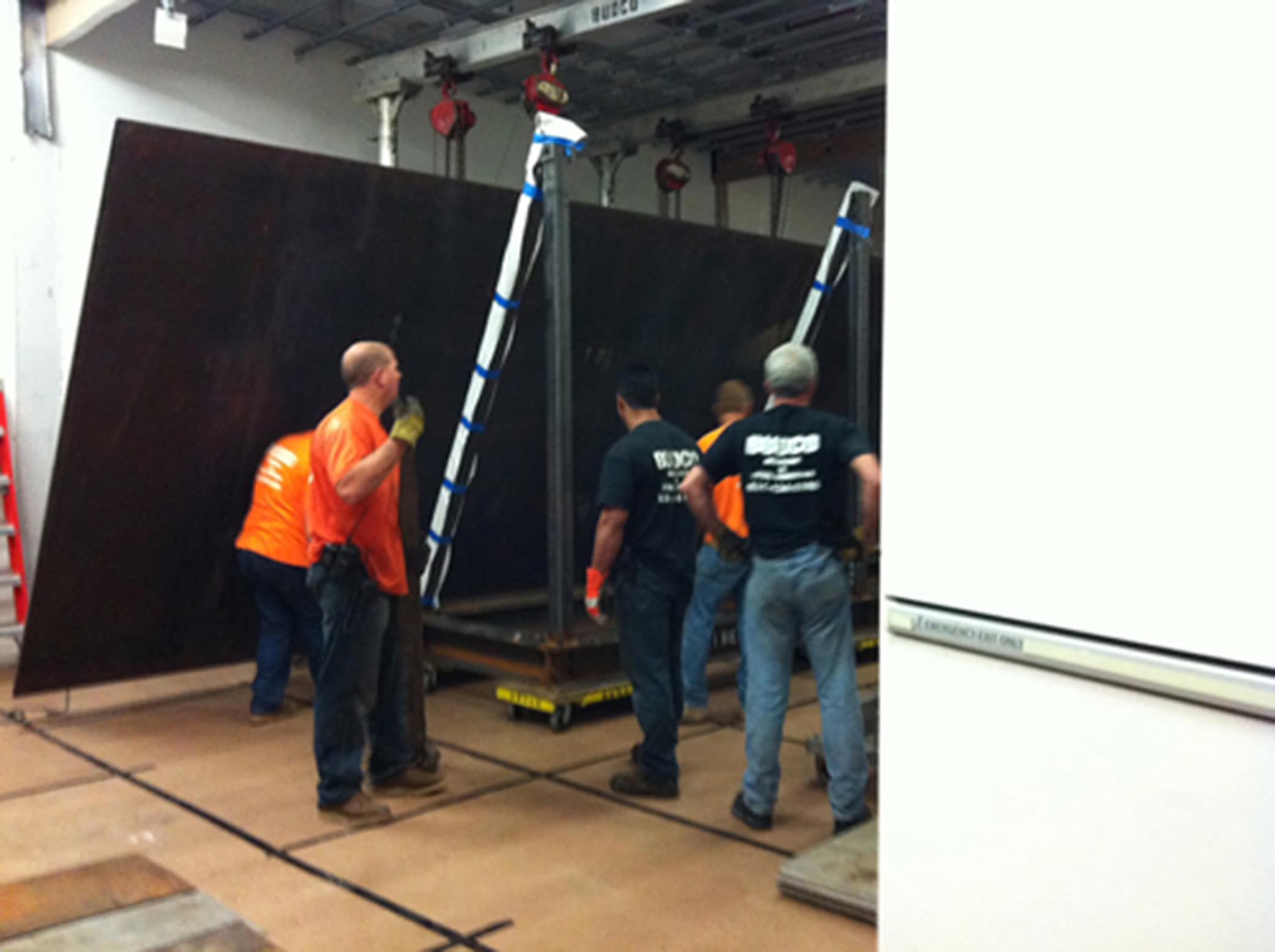 Each plate was hoisted up onto its own A-frame cart, custom designed to allow the plates to tilt just enough so that they cleared both the height and width of the gallery doorways. 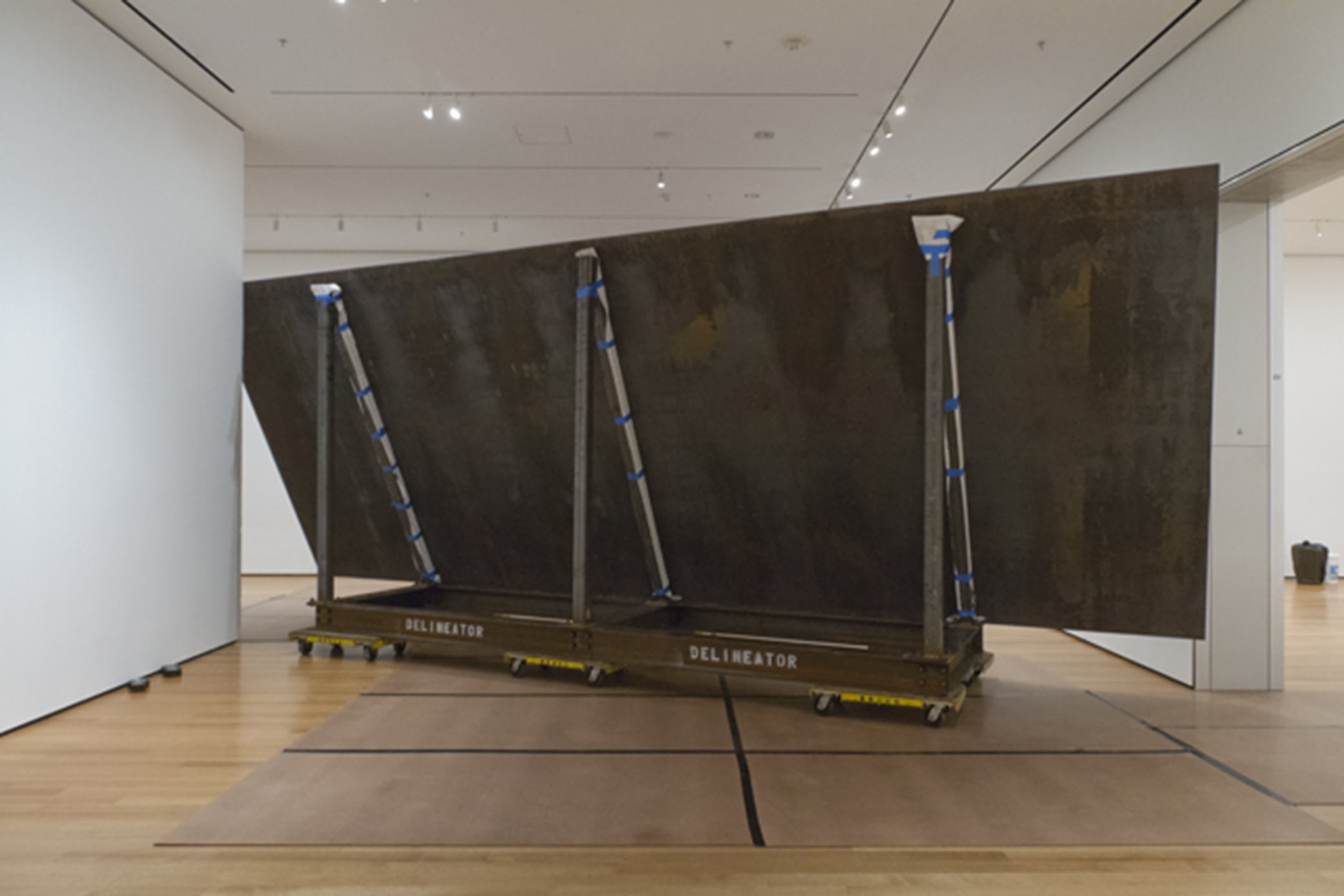 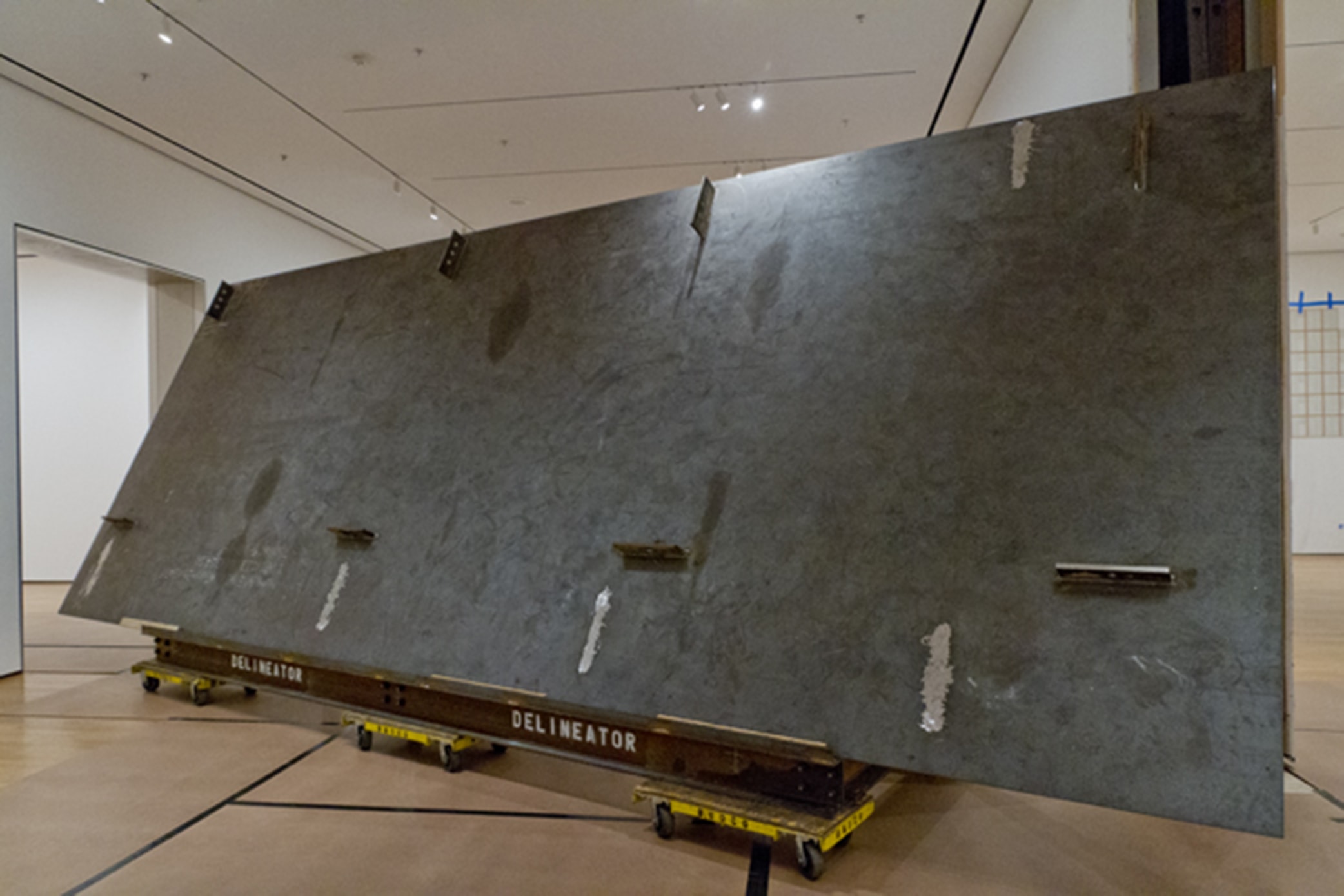 The riggers then carefully guided the plates halfway across the floor to the gallery, which had previously been outfitted with a hole in the ceiling and a complex system of pulleys. 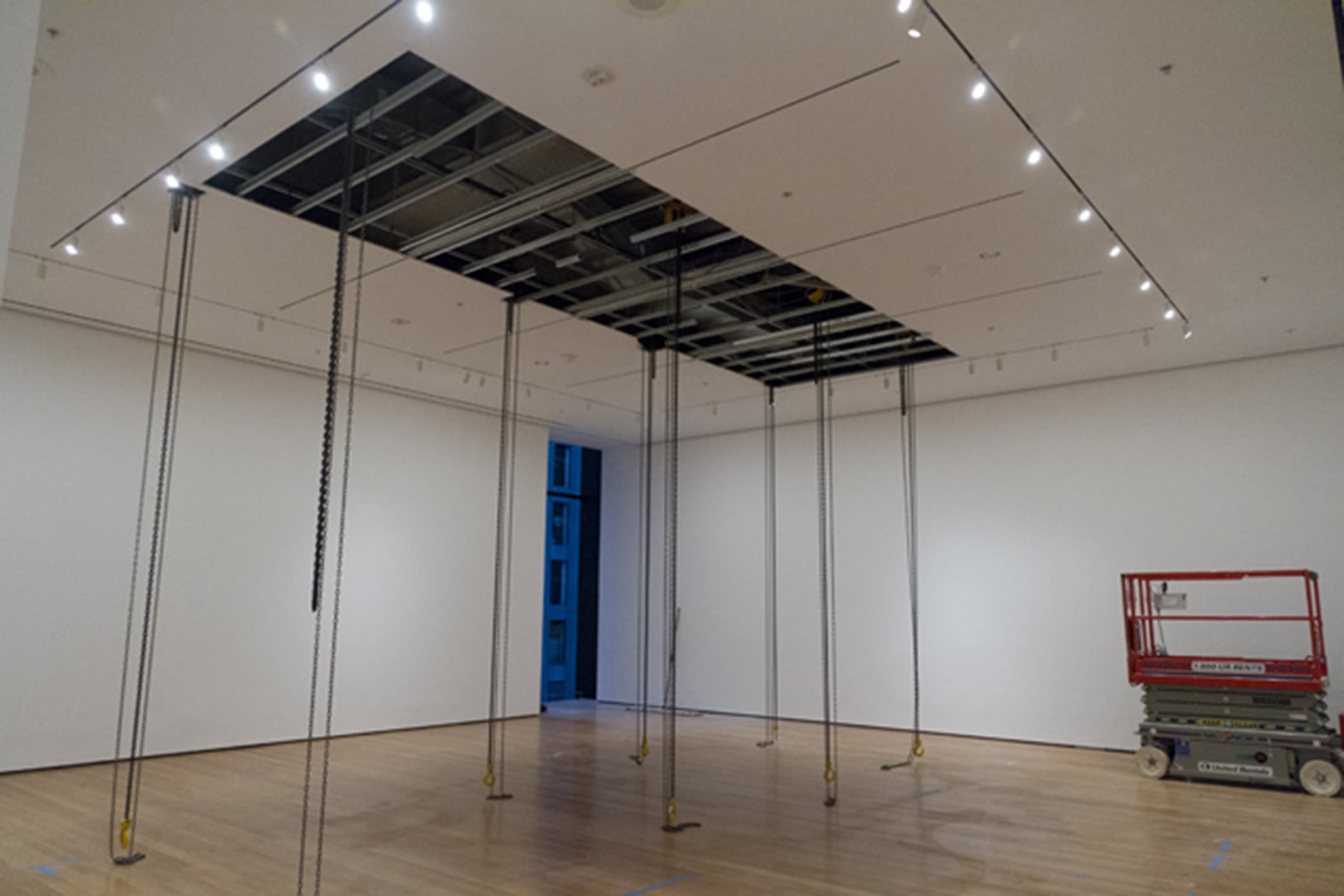 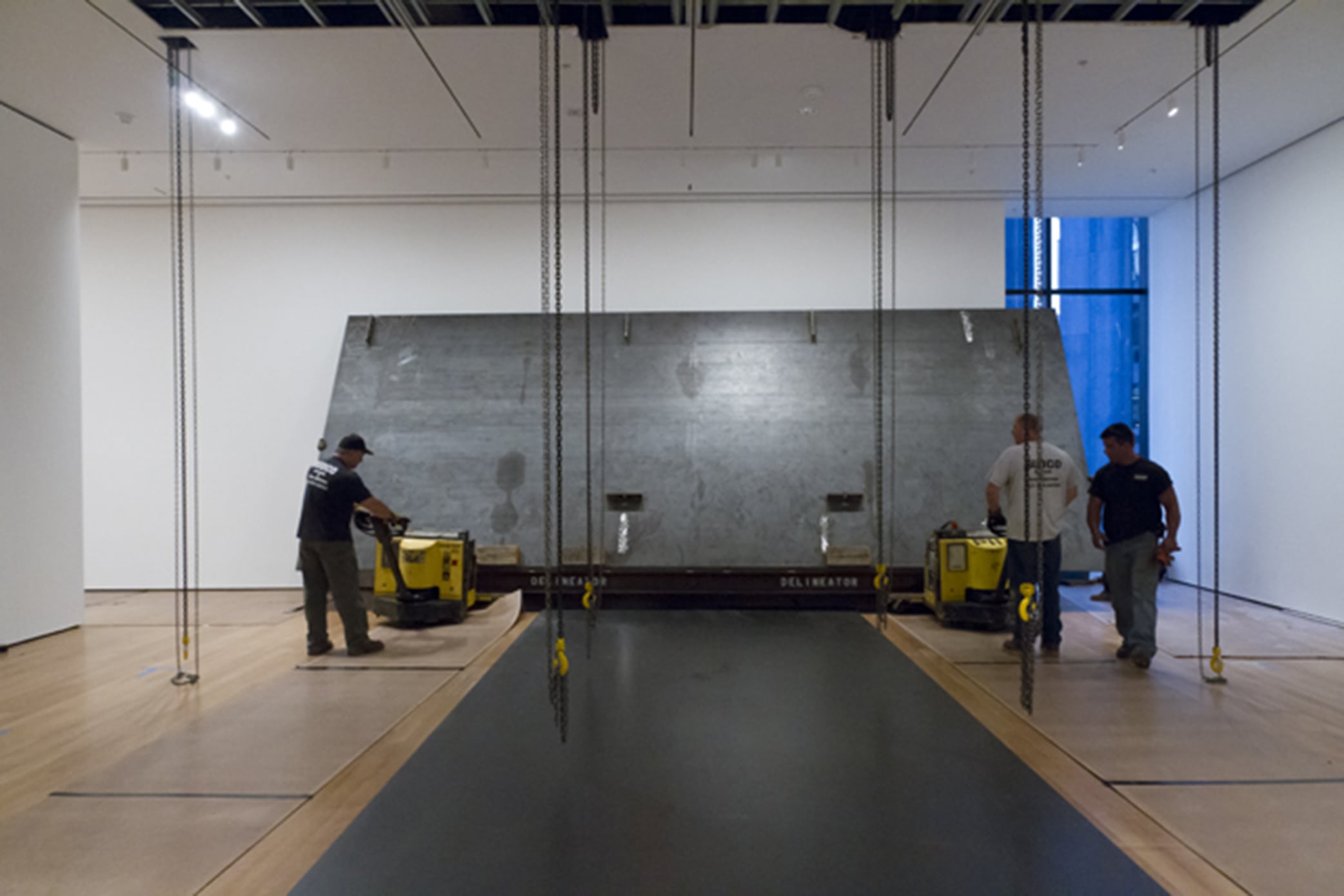 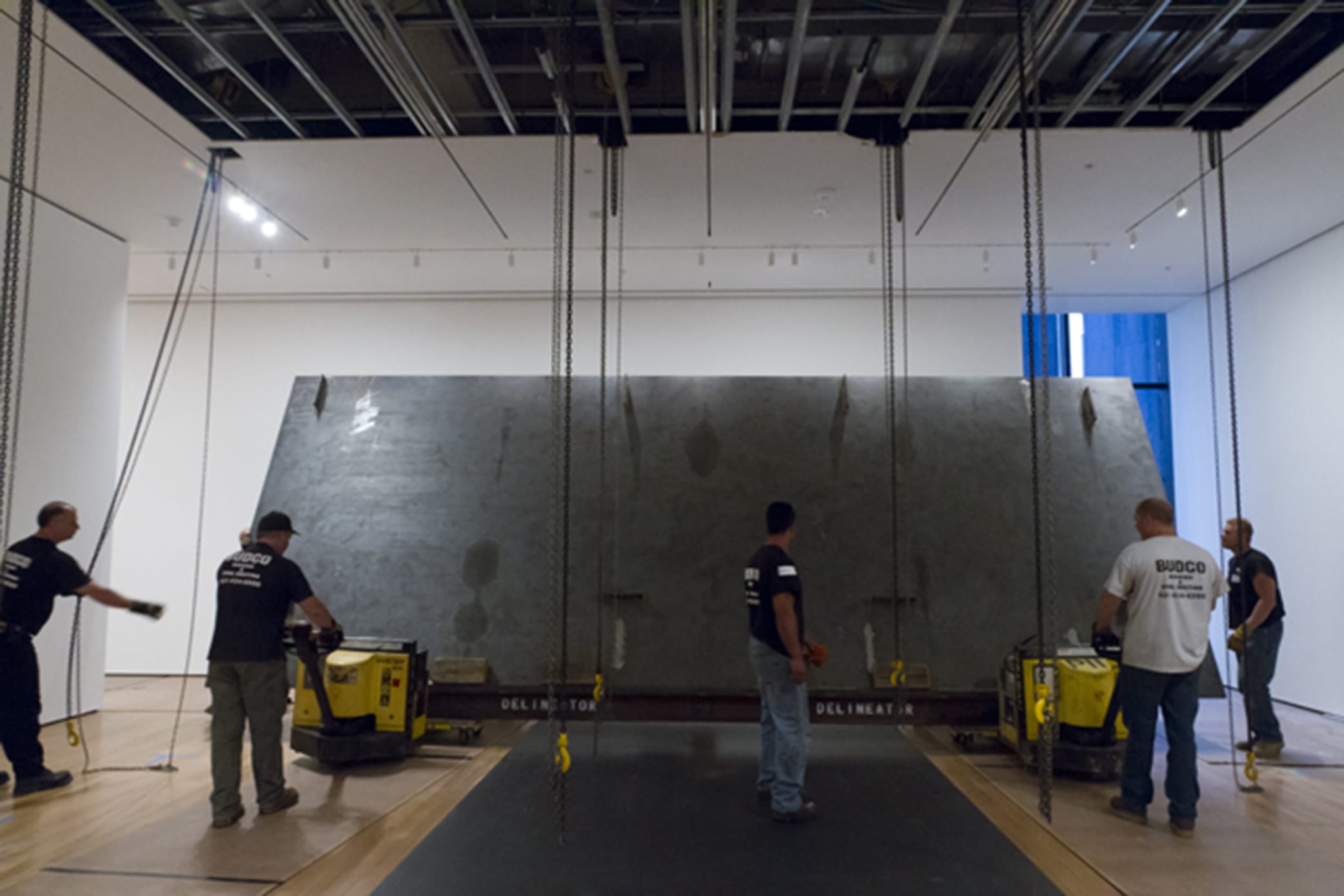 Once they lowered the first plate into its position on the floor, the crew attached the hanging chains to corresponding points on the top of the upper plate, and began to hoist it up. 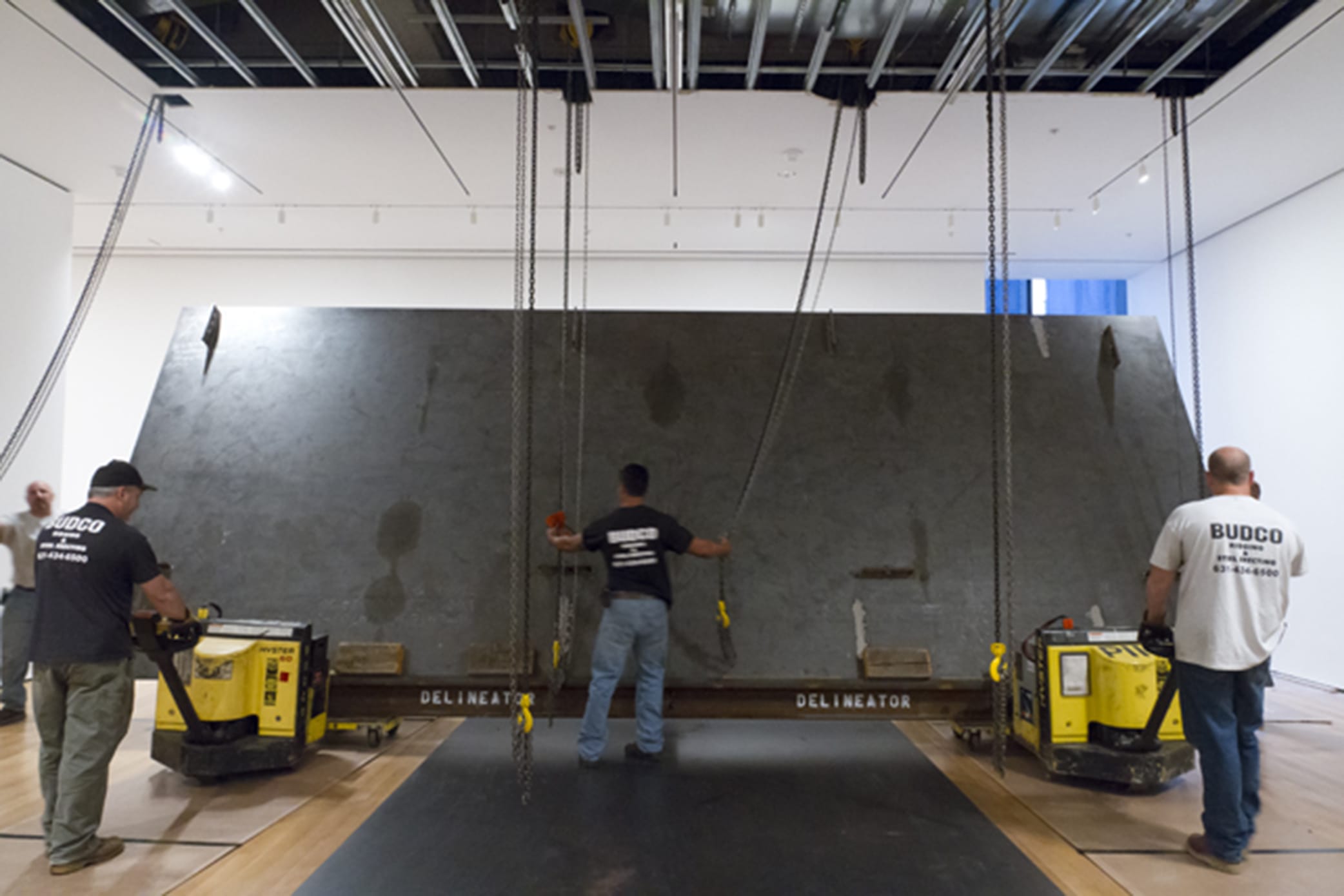 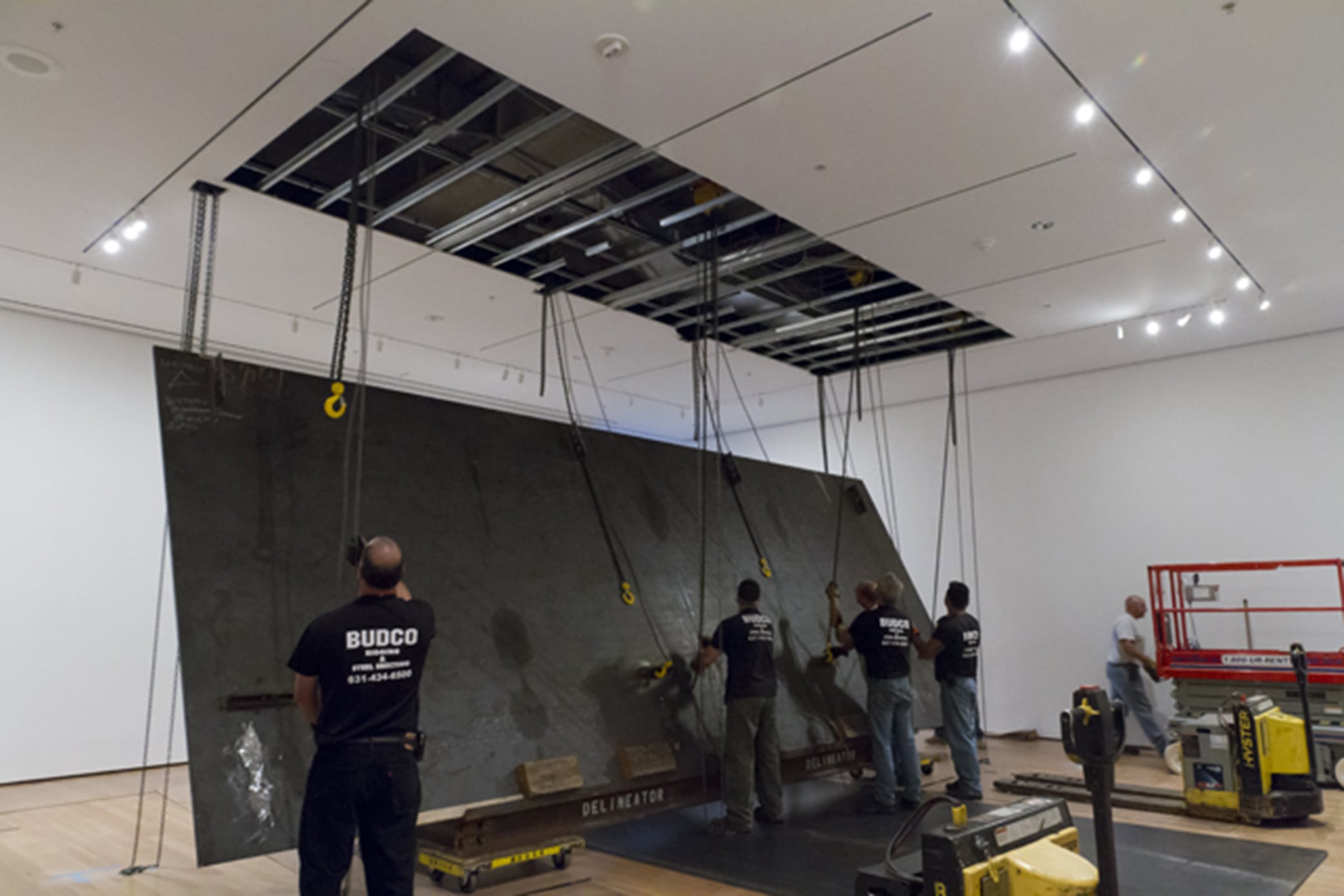 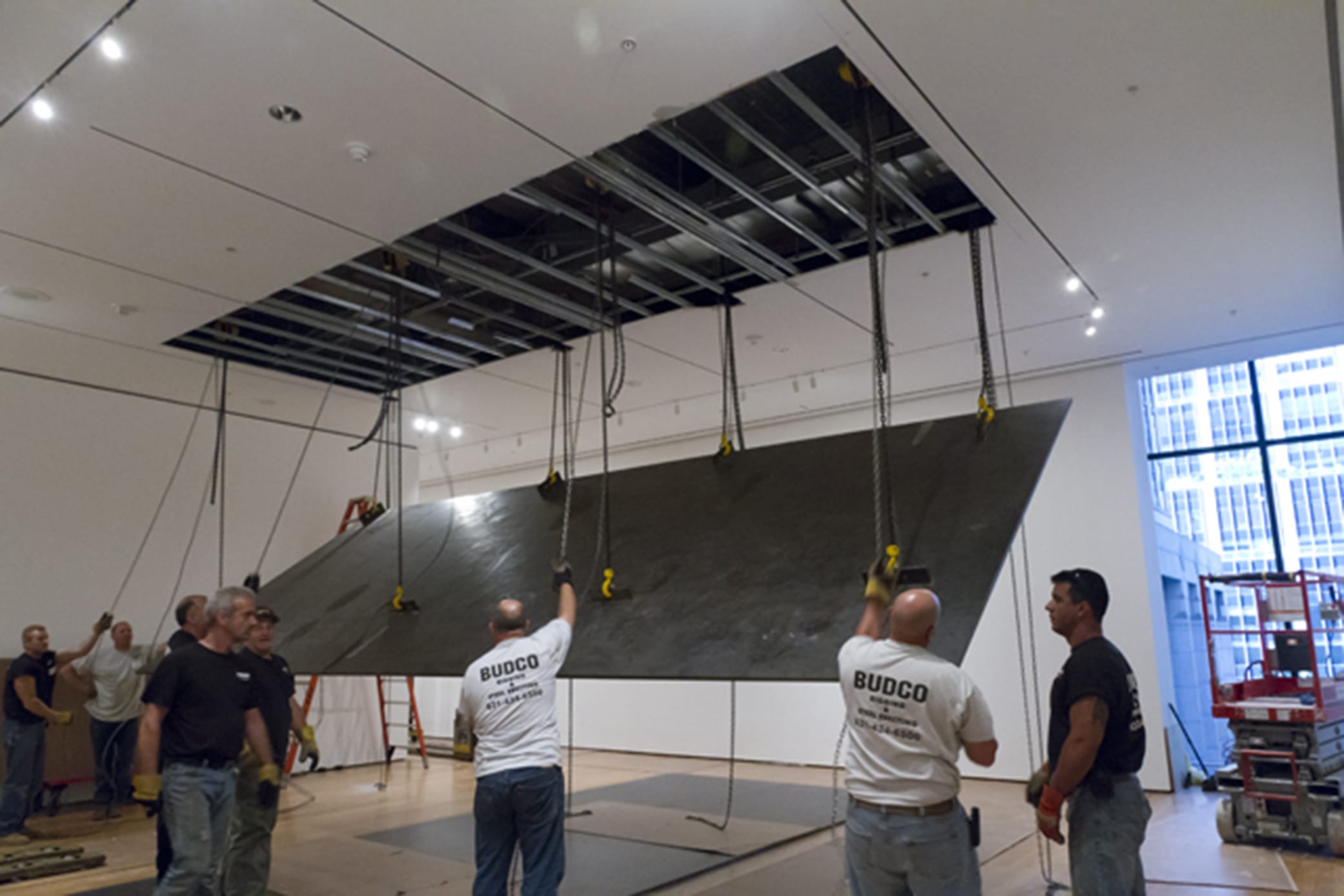 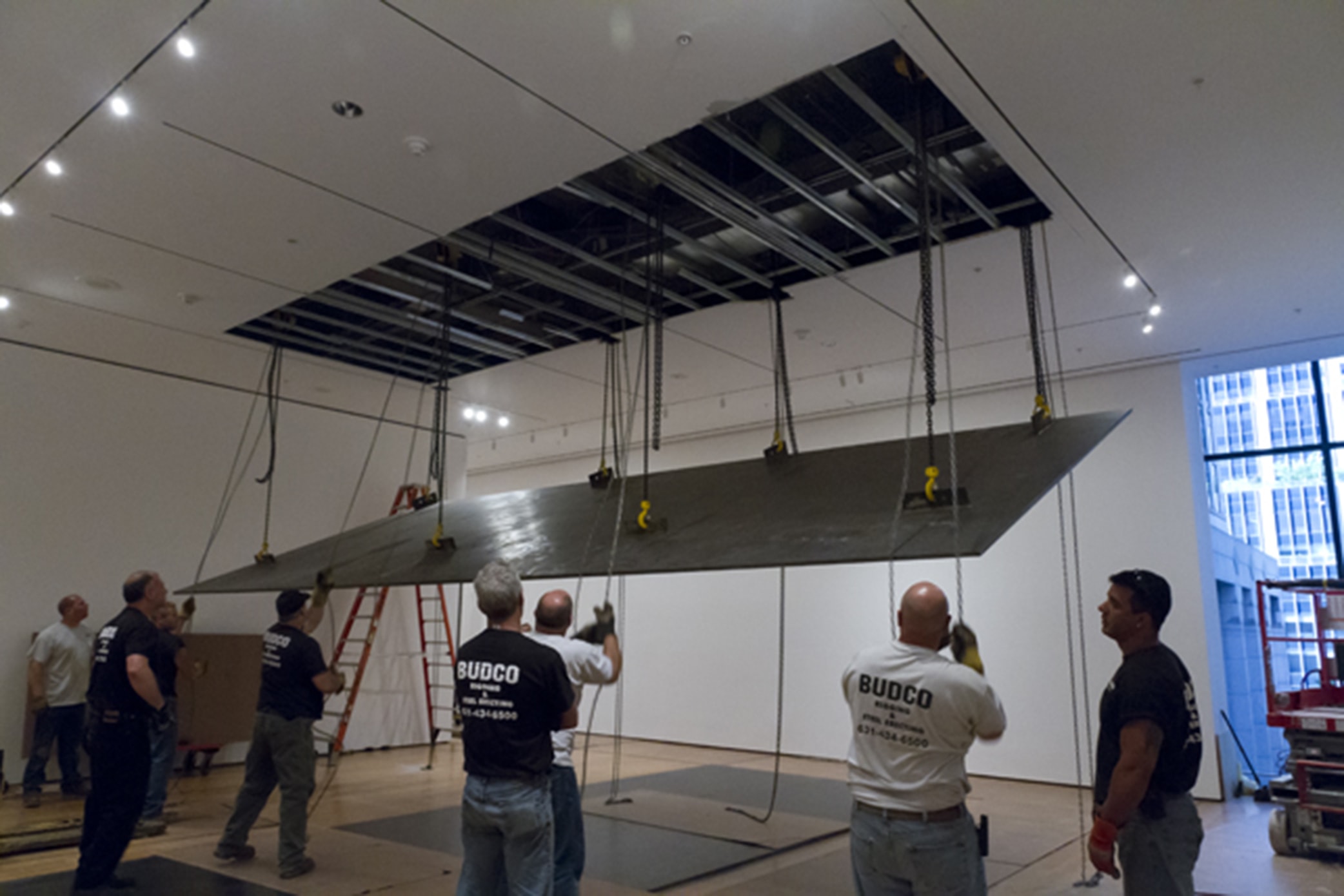 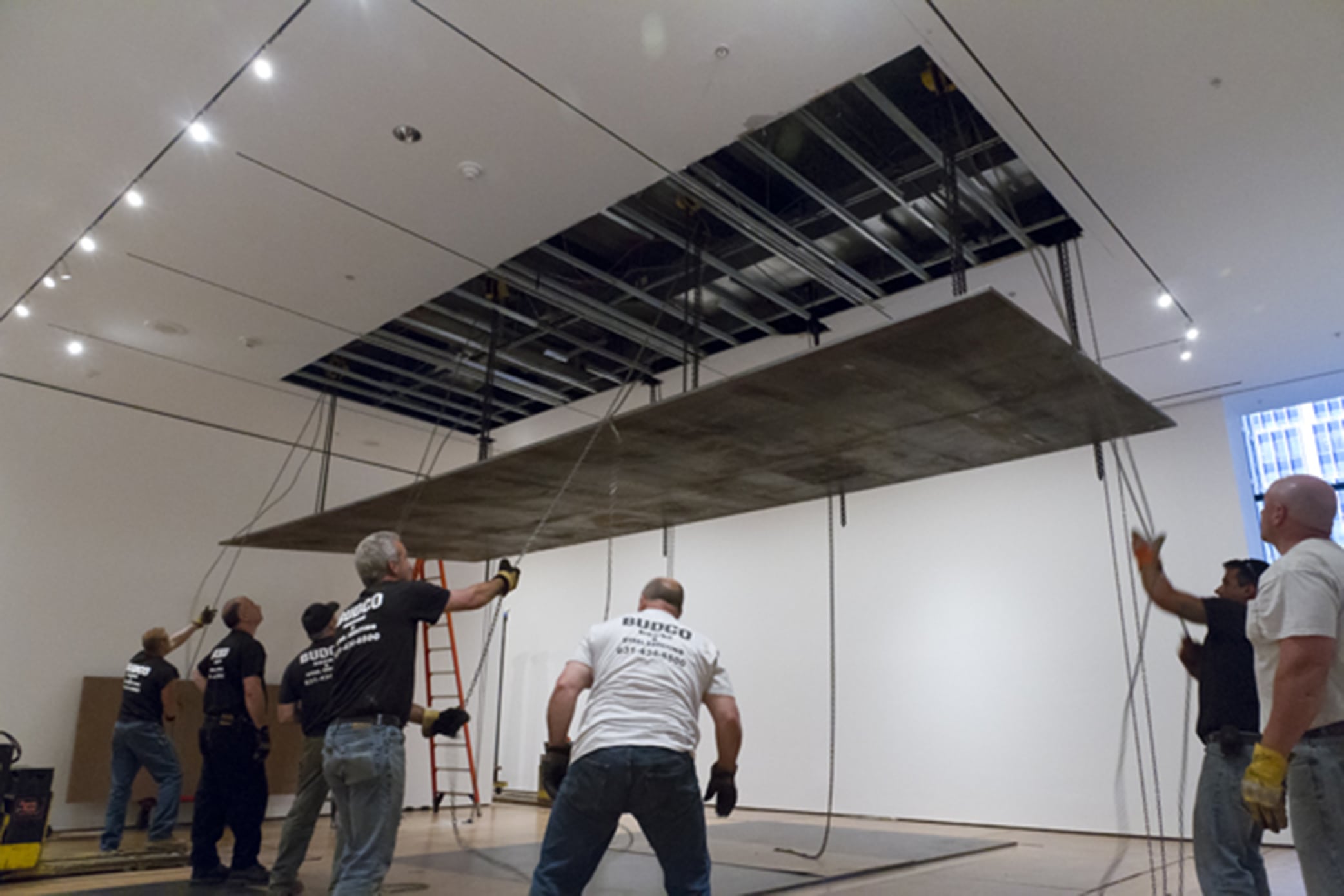 In a choreographed expression of sheer strength, the riggers pulled on the chains together in perfect unison for several minutes, as the massive plate slowly made its way upward. 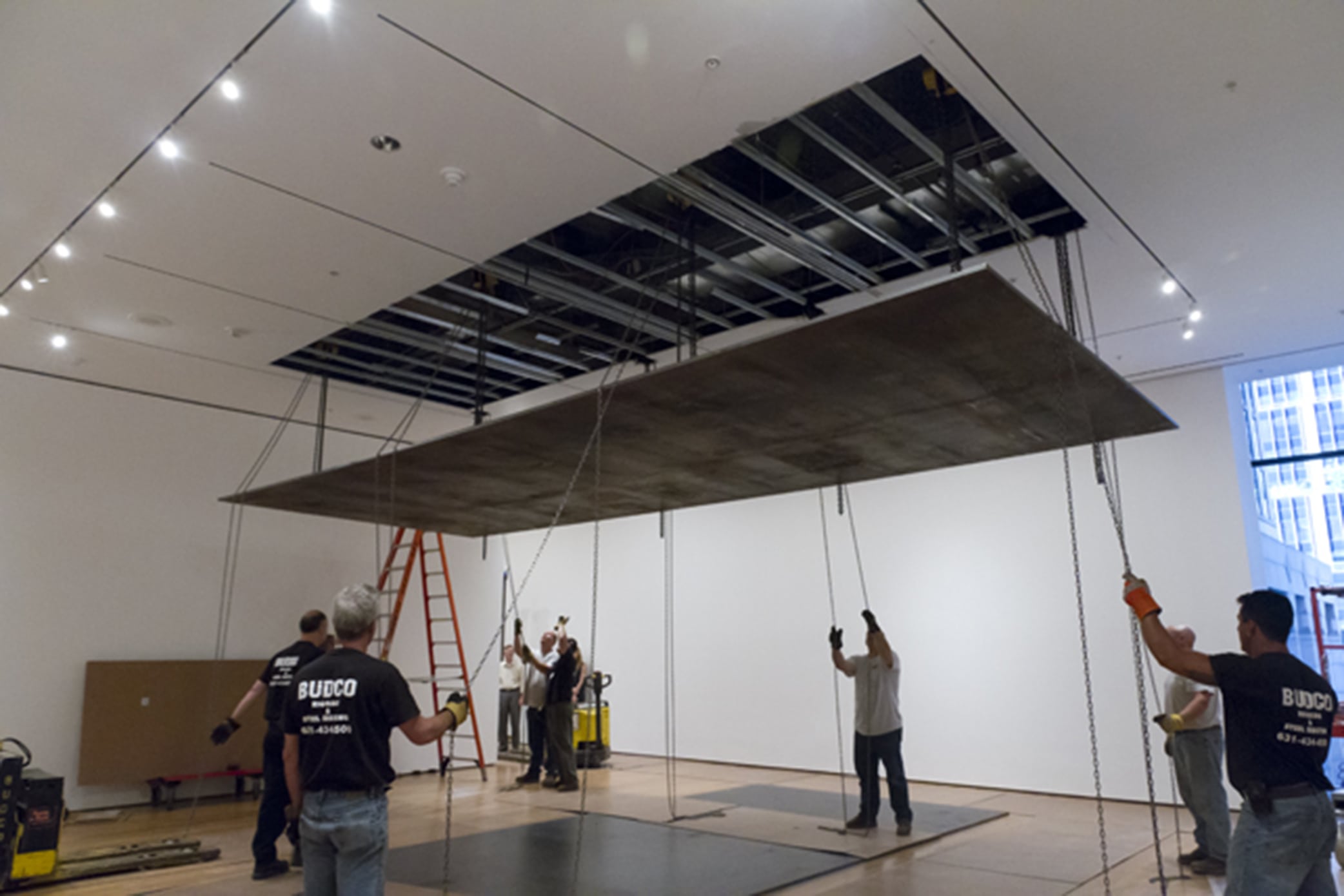 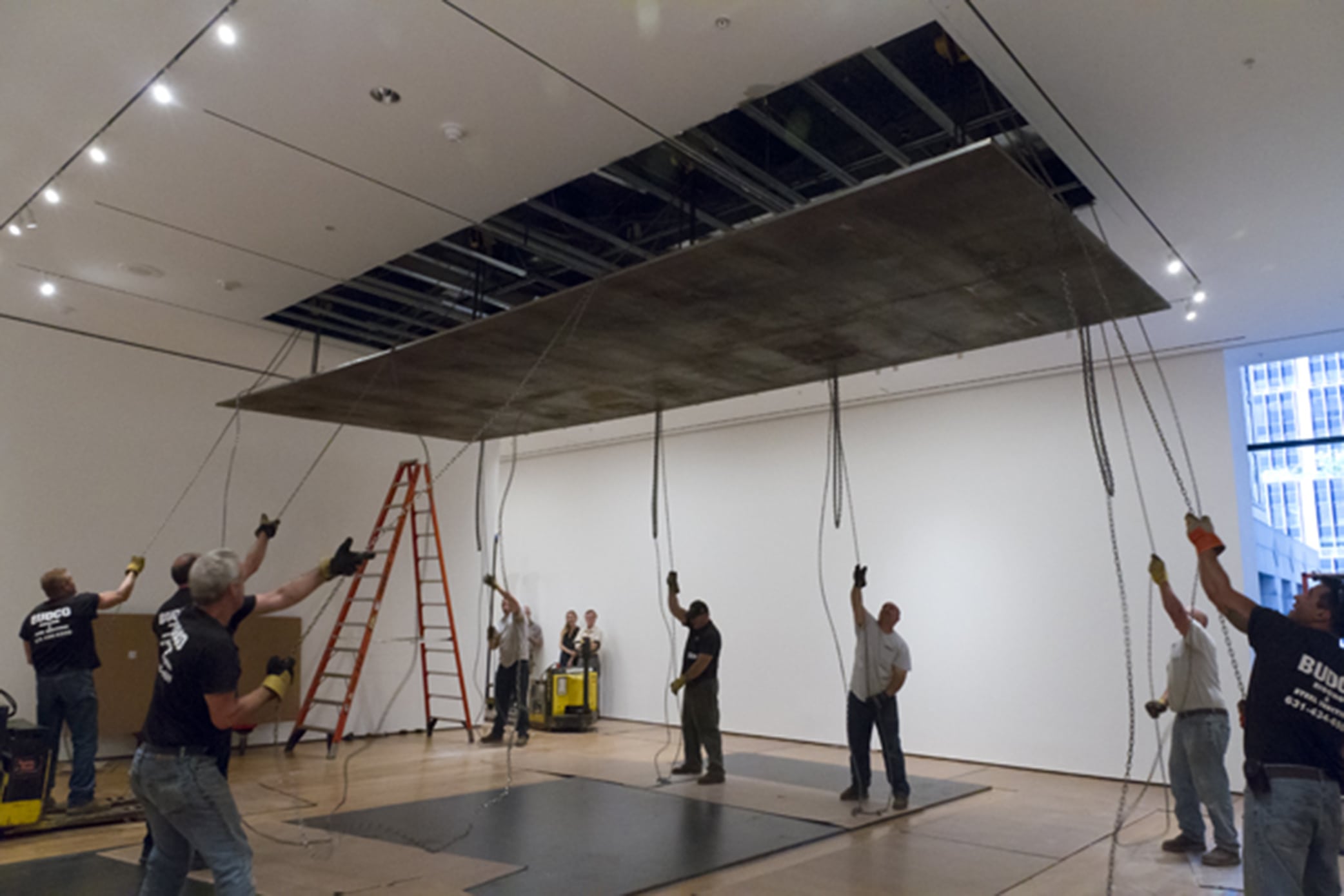 Eventually, when the plate neared the ceiling, a few riggers had to pull themselves right up inside. 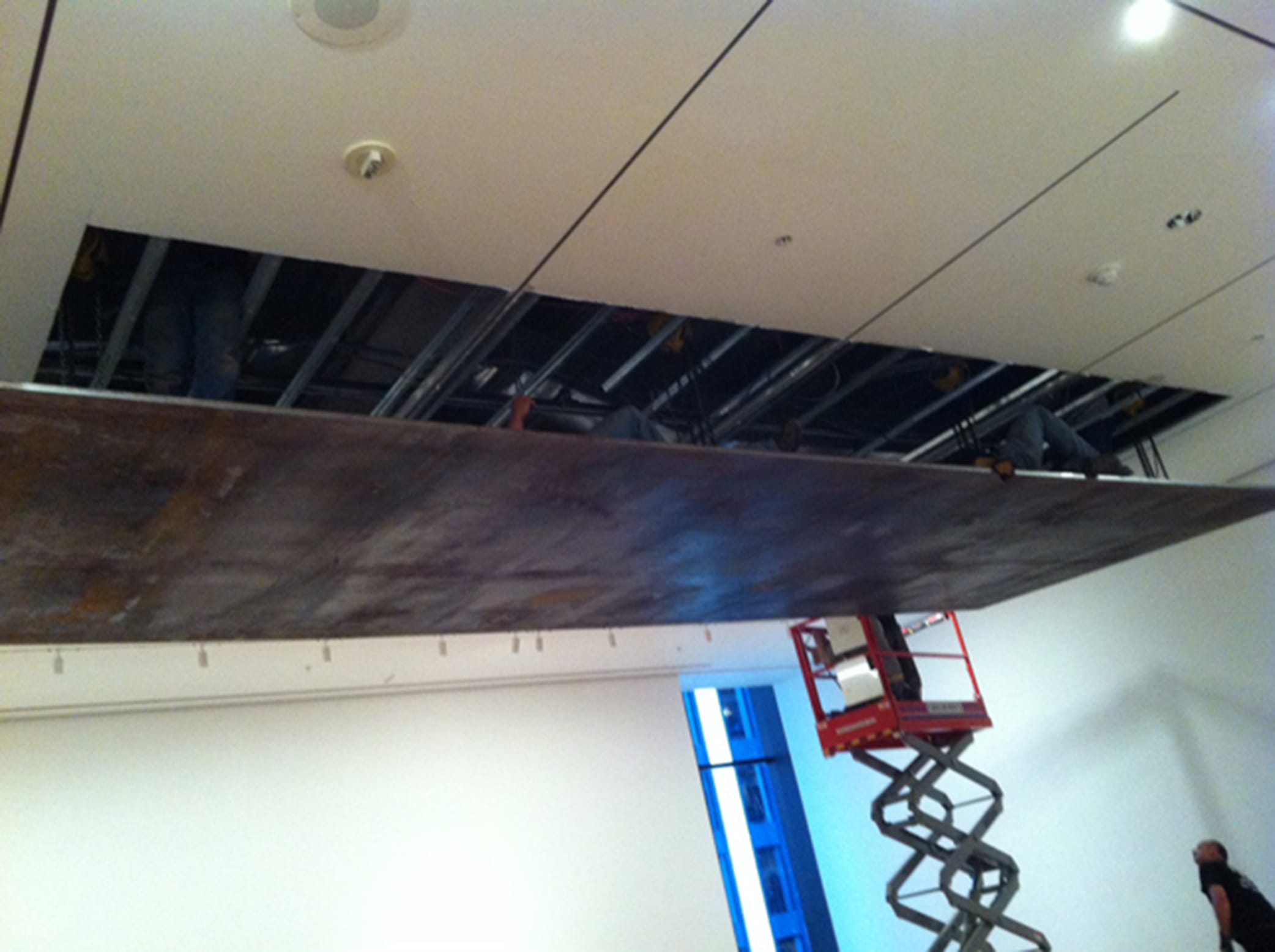 Two escape holes had been cut for them on the spot, and soon the men came out, one by one. A little bit of cosmetic work to patch the holes in the ceiling and sweep up the debris, and our work was done! 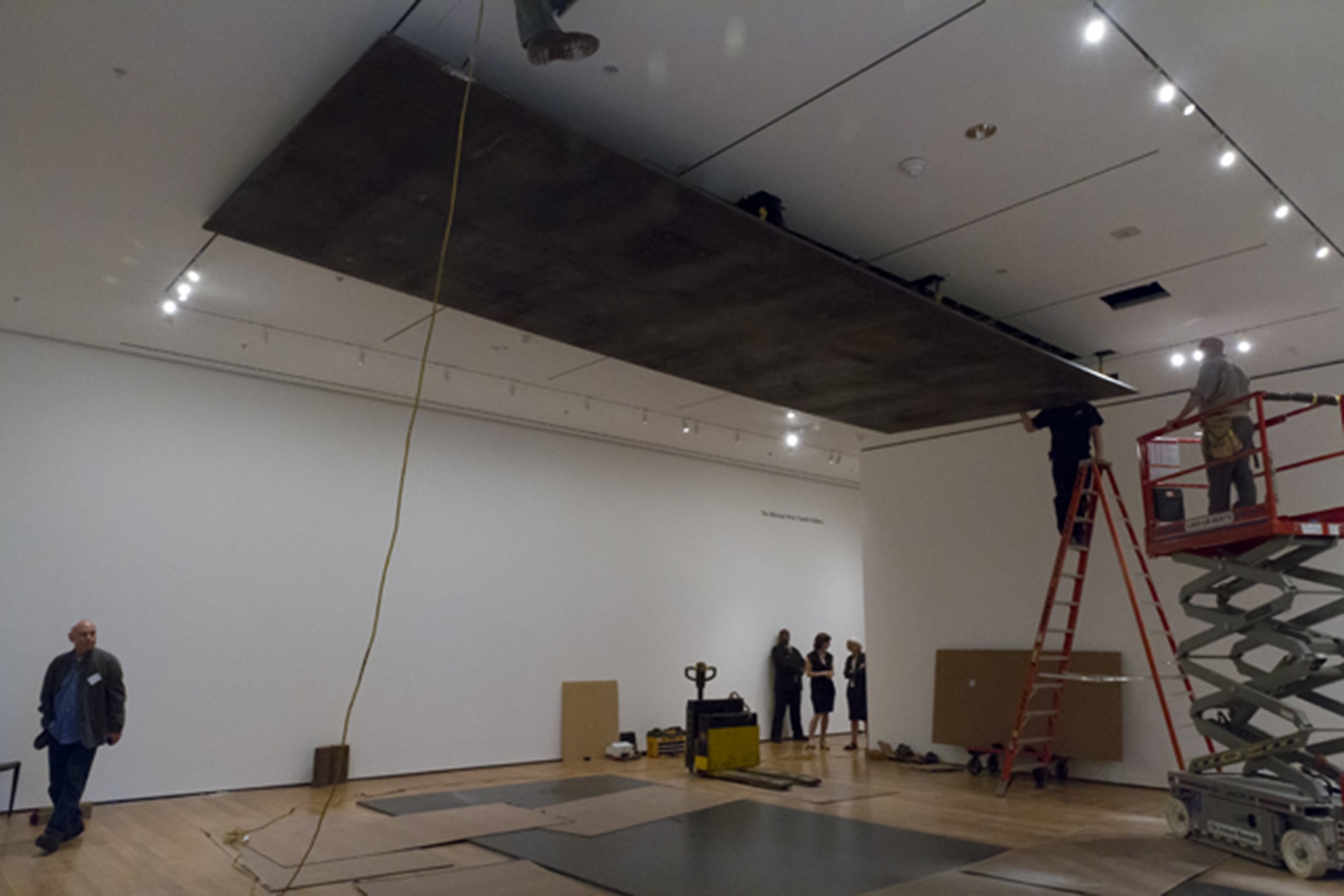 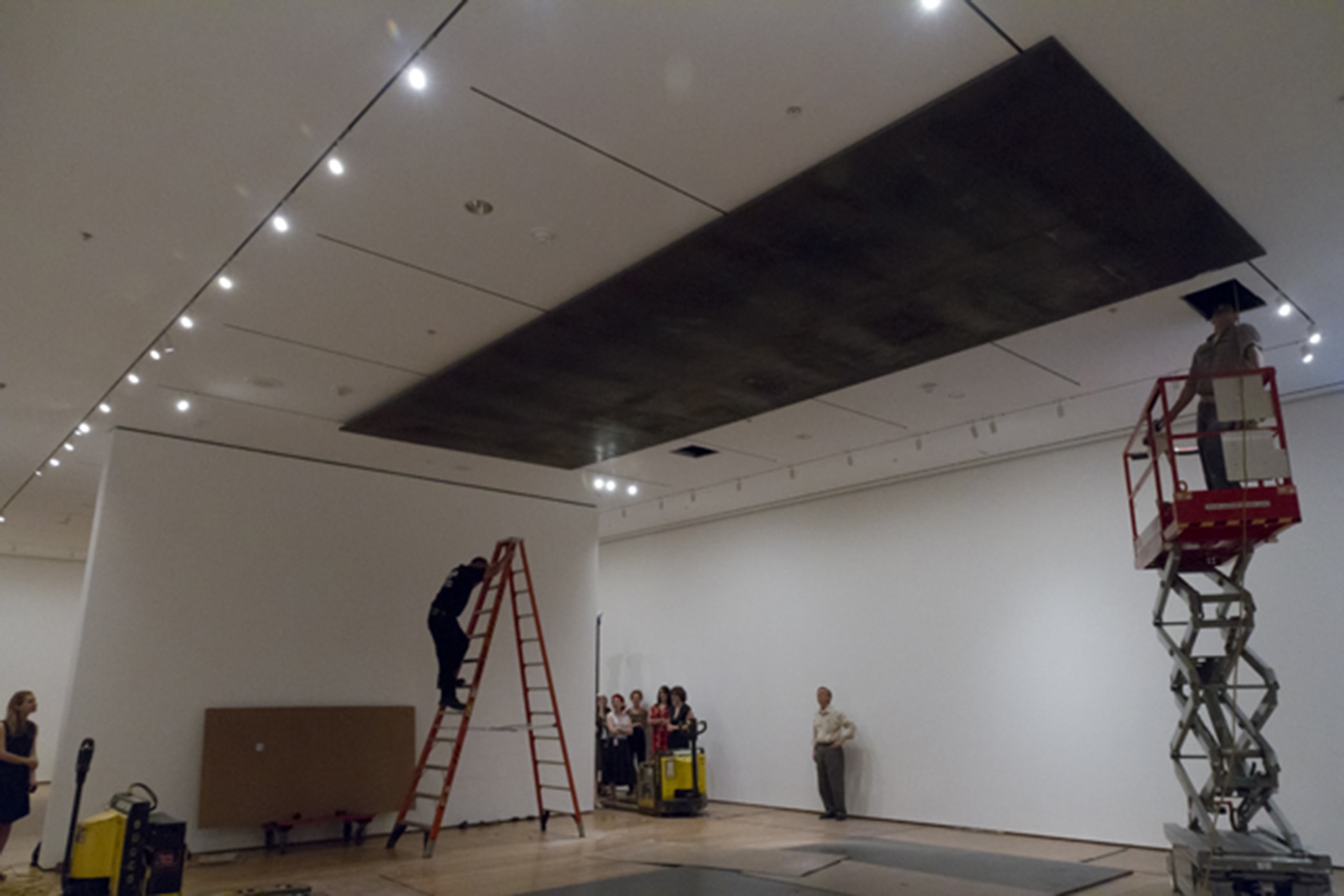 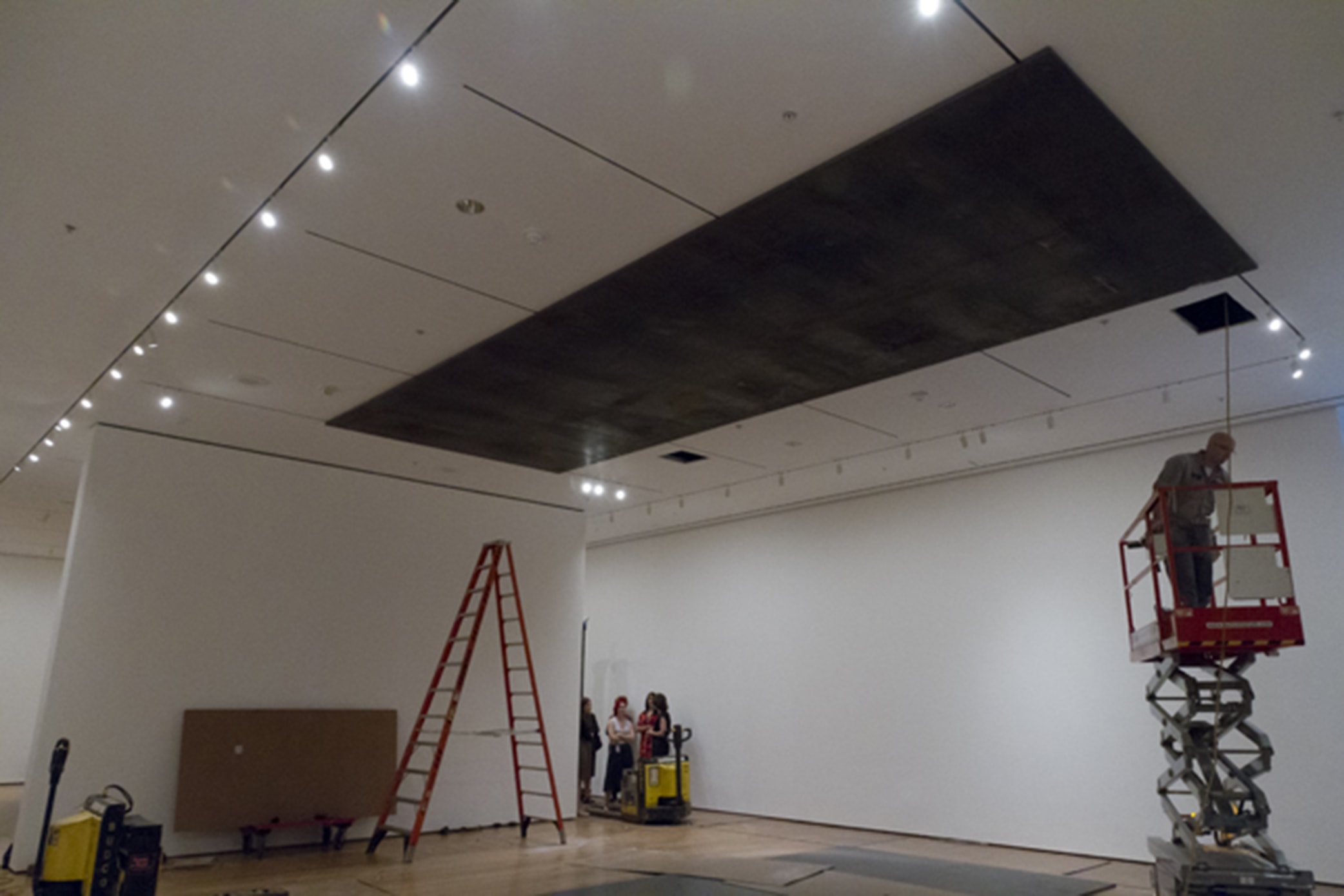 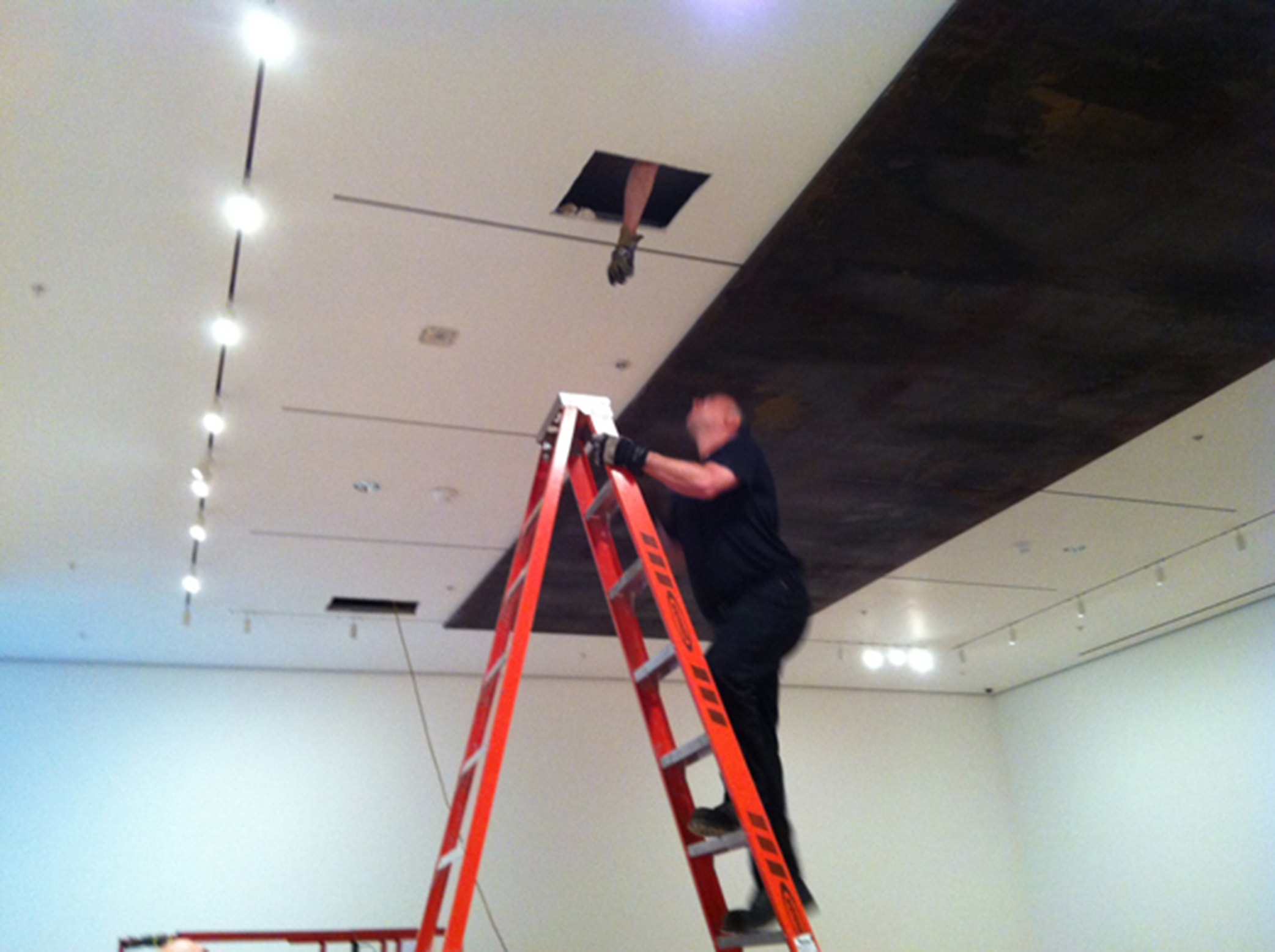 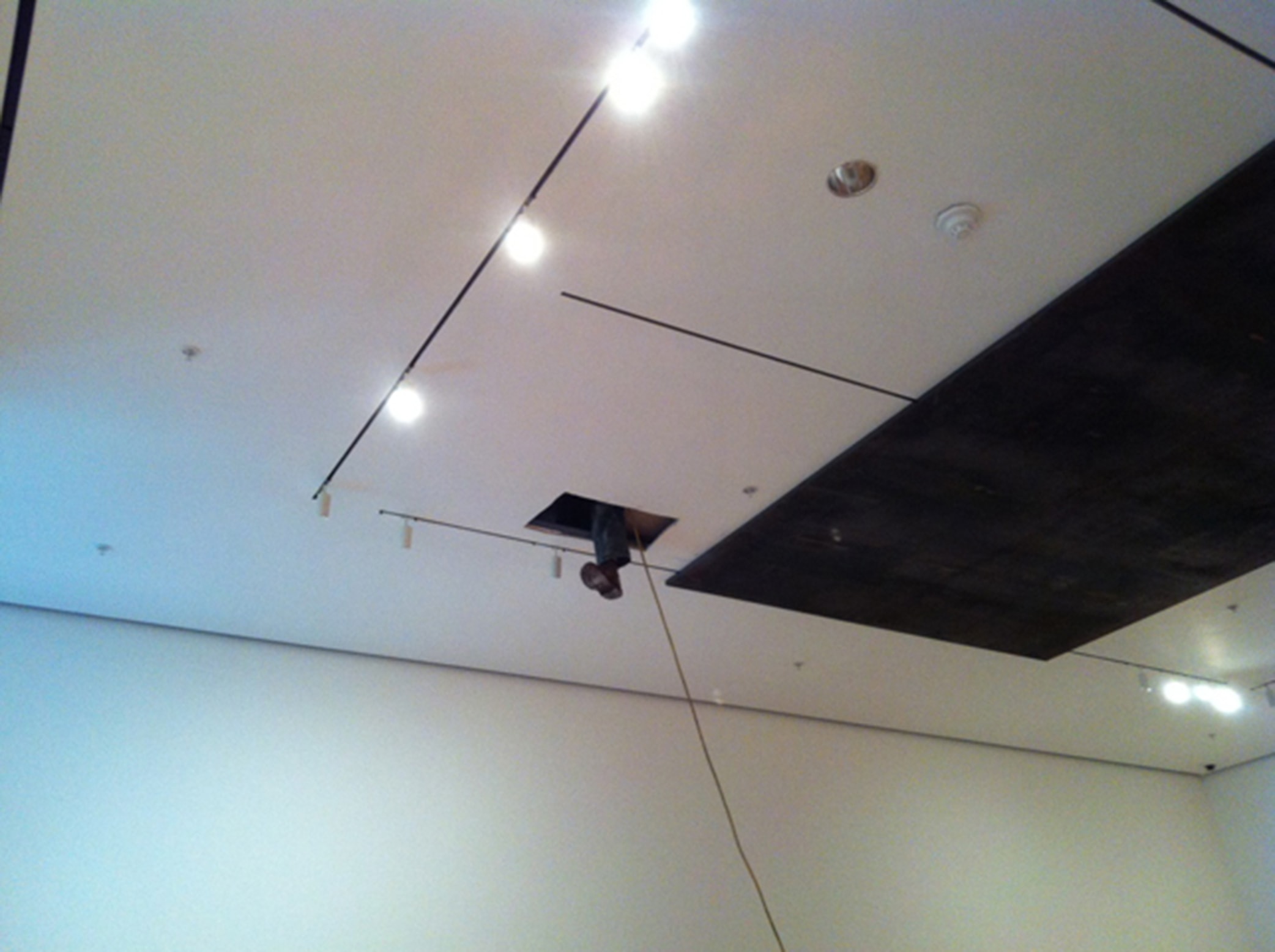 It is an incredible experience to stand within the work, one that is simultaneously awe-inspiring and anxiety-inducing. But I do feel comforted, in a way, to have had the opportunity to understand the meticulously calibrated mechanism designed and employed to suspend those tons of steel 14 feet in the air. Don’t worry, one of the riggers assured us, the chain system is strong enough to hold three times the weight of the one plate!

The Dinosaurs Arrive and Unload at the Cleveland Metroparks Zoo
June 18, 2015